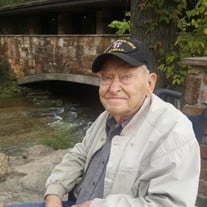 William Tanner Sr, 96, of Warr Acres, Oklahoma, went home at 12:05 AM, December 08, 2018 at The Norman Veterans Home in Norman, Oklahoma. He was born July 31, 1922 in Hoxie, Arkansas, to Jessie and Dora Tanner. Bill married the love of his life of 43 years to Louise Beulah Gooden on September 28, 1948 in St. Louis, MO until her death on May 25, 1993. He is preceded by death by his wife Louise, his parents Jessie and Dora Tanner, daughter Debbie Schneider of Rocksprings, Texas, Brother Jessie (Red) Tanner of Florida and Granddaughter Brenda Wright, of San Antonio, Texas. Bill is survived by his Sons, William and Toni Tanner of Warr Acres, Oklahoma, Thomas Tanner of San Antonio, Texas, Granddaughter Lauren Marie Tanner, and Grandson Jeff Levi Tanner of Oklahoma City, OK. Bill’s extended family in Texas includes, Kenneth Schneider (Son in Law) of Rocksprings, Texas, Grandson Shane, Amy and Colin Schneider of Rocksprings, Texas, Granddaughter Eva Schneider of San Antonio, Texas and Jonah Wright (Great-great Grandson) of San Antonio, Texas and 5 Great-Great Grandchildren and 5 Great-Great-Great Grandchildren. Bill was a long time resident of Houston and San Antonio, Texas until relocating to Oklahoma with his Son William Jr. in 1999 when Kelly AFB closed due to BRAC Base Closure He was an avid fisherman both in Texas and Oklahoma and earned the name of “Snag King” knowing he always got snagged on brush piles wherever he fished. Bill also was a Master Carpenter both in Houston and San Antonio and built homes for numerous Builders such as Ray Ellison and Ed Messick back in 1970’s. He also worked at Medina Base in San Antonio as a Contractor for Mason and Hanger which designed and manufactured Nuclear Ordinance Shipping and Storage Containers. In the late 40’s after serving in The Army-Air Corp in Burma as a Tech 5 Combat Engineer which involved laying out roads, runways, landing pads, building bridges, setting up explosive materials. After leaving the Army, Bill relocated to Houston and worked as a Tug Boat Captain at the Houston Ship Channel before landing a job at Brown and Root Drilling and afterwards Hughes Tool Company which was owned by Howard Hughes. In his spare time, Bill loved his Hybrid Roses and often walked down the street and gave all the neighbors roses he planted in his yard each and every year. Bill unconditionally loved all of his Grandchildren both here in Oklahoma City as well as San Antonio. He always looked forward to having lunch or sharing a cold one with them on a weekly basis and cherished the ground they walked on. Bill was loved and cherished by all who knew him especially the Staff and Nurses at The Norman Veterans Home that took care of him for 3 years until he died. He was the Love of their life and often kept in trouble by keeping his Bingo Cards with him or visiting other Veterans and staff members telling War Stories, telling jokes or speeding up and down the hallways in his Electric scooter flirting. He loved working puzzles there with his daughter in law Toni every week and walking with her to the lake with “Sarge” the Veterans Home Mascot every Sunday feeding the fish, geese and having lunch afterwards. She made a difference in his life and brought love and balance into his heart. In closing, my family and I wants to thank each and every one of you that attended today and know all of you made a difference in his Life. Thank you and God Bless ……… You will always remain in our hearts. To send flowers or a memorial gift to the family of William Tanner Sr. please visit our Sympathy Store.
To order memorial trees or send flowers to the family in memory of William Tanner Sr., please visit our flower store.