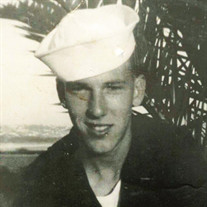 On Friday, July 19th, William Joel Ferguson Sr. "Billy Joe" passed away due to cancer. He was born December 25, 1929, proudly served in the US Navy from 1948-1953, and married his wife of 57 years, Donna, in 1949. He retired from the State of Oklahoma at 57, and spent his latter years with his siblings, children, and grandchildren. He was a generous friend and help to so many in his tight-knit neighborhood, lending tools or a hand wherever needed, and looking in on the elderly. He is preceded in death by his wife Donna Elaine Ferguson, and his son William Joel Ferguson Jr. "Joe", and is survived by his son Stephen Dwain Ferguson, five grandchildren, and seven great grandchildren. To send flowers or a memorial gift to the family of William Joel "Bill Joe" Ferguson please visit our Sympathy Store.
To order memorial trees or send flowers to the family in memory of William Joel "Bill Joe" Ferguson, please visit our flower store.