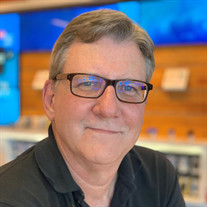 On Sunday December 5, 2021, William “Bill” Parks, loving husband and father, passed away at the age of 66. Bill was born on March 13, 1955 to Louis and Loretta Parks. He grew up in Oklahoma City and Edmond, attending Edmond High School, back when there was only one to attend. He played all the sports – basketball, baseball, and football, as well as excelling academically. He continued to be active in sports including golf and bowling well into adulthood. Bill started working for M-D Building Products in 1975 as a Machine Operator and Executive Courier. He left in in 1978 to pursue a degree in Accounting from Central State University and returned to M-D in 1981 to work in Finance, eventually becoming the Manager of Cost Accounting and Financial Analysis. He continued to spend his entire 46 year career at M-D working in every capacity from Engineering to Marketing, finally becoming Manager of Product Attributes in 2018, a role he held until his passing. Bill had a passion for music and an obsession with The Beatles, Dan Fogelberg, and Cat Stevens. He never missed an opportunity to watch a video of a concert or recording session online of one of his “heroes”. He played the bass and guitar in several bands and loved writing his own music. He loved his animals and always had a dog or cat (though he would say he was not a cat person). He spent 41 years playing Fantasy Football with the same league, his mood ebbing and flowing with how well his team was doing. You knew it was a bad day when he would say “I’m going to mow the lawn” on a Sunday, although he did love taking care of his lawn. One of his proudest achievements was winning “Lawn of the Month”. Bill was preceded in death by his father Louis. He is survived by his mother Loretta, sisters Sheri, Meri, and Lori, daughters Rachel and Lyndsay, and wife Jennifer. He was a compassionate and loving man and will be greatly missed. To send flowers or a memorial gift to the family of William "Bill" Kevin Parks please visit our Sympathy Store.
To order memorial trees or send flowers to the family in memory of William "Bill" Kevin Parks, please visit our flower store.