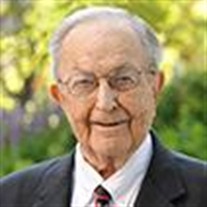 Val R Miller, 94, of Oklahoma City, left this earth to be with his Lord and Savior on January 16th, after a brief stay in Baptist Hospital. Val was born September 9, 1922 in Duncan, OK. He graduated at Duncan High in 1940. After a year at Cameron Junior College, he went to California and ended up enlisting in the Army Air Corp. He decided to become a pilot but soon found the job of bombardier to be a better suited fit. He was promoted to 2nd Lt. and eventually assigned to the 765 Bomb Squadron of the 461st Bomb Group (a part of the 8th Air Force). Val participated in 21 missions throughout Europe. His last mission was aboard the Tulsamerican. During the mission, the plane was attacked by German fighters. After shooting down two enemy planes, The Tulsamerican was forced to return to base due to damage from enemy fire, but was unable to complete the return trip and crashed in the Adriatic Sea near present day Croatia, on Dec. 17, 1944. Val and several members of the crew survived the crash and were rescued, after several hours, by friendly locals. Val suffered a compound fracture of his leg during the crash. After a year of recuperating in several hospitals, Val returned home to his wife, Sue (Frensley) Miller and entered Law School at the University of Oklahoma. Upon graduation, Val started a law practice in Duncan, Oklahoma and ran for the State House of Representatives. He served two terms from 1949 – 1953. Val then moved his family to Oklahoma City and began a long career at Crowe & Dunlevy Law Firm. His son, Brad Miller, followed in his footsteps and became a lawyer, as did Brad’s son, Ben Miller, making three generations of attorneys in the Miller family. Val had a great passion for sports. He played football and wrestled at Duncan High School. He loved the University of Oklahoma football and wrestling teams and supported both for many years. He loved watching the softball nationals and small high school basketball, especially Okarche Warriors. He enjoyed golfing for many years and even made a hole in one in 1974. Val was very involved in church over his lifetime. He loved Christ and served in various capacities and was a member of the Metropolitan Baptist Church. He enjoyed being a member of the Koinonia Sunday School class and loved the fellowship made possible by the members of this tight knit group. He loved his friends and family and was constantly helping others. He regularly provided legal advice or assistance to those in need. Val was a proud Oklahoman who stayed close to his roots. He is survived by his three children, Robert Trent Miller and wife Susie of Prattville, AL, Ray Bradford Miller and wife Robyn of Midland, TX, and Susan Claire Miller of Oklahoma City, OK; step-children Cindy Combs and family of Long Island, NY, Donna Kosted and family of Austin, TX, Kim Bellieu and family of Oklahoma City, OK; grandchildren, Melissa Kimbrough of Oklahoma City, OK, Valerie Christian of Edmond, OK, Ben Miller of Houston, TX, Blair Miller of Los Angeles, CA, Ryan Miller of Clanton, AL, Nathan Miller of Wetumpka, AL, Samantha Miller of Prattville, AL. He is also survived by 9 great grandchildren and one great-great grandson. Val was preceded in death by his parents, Effie Miller and Clyde Miller, a brother, Clyde Allen Miller, a sister, Danny (Miller) Spiller, his first wife, Sue (Frensley) Miller, and second wife, Iris Marie Miller. The family is grateful for the care and compassion from the ICU staff at Baptist Hospital in his final days. There will be a memorial service on Tuesday, January 24th at 10am at Metropolitan Baptist Church, 7201 W. Britton Rd., Oklahoma City, OK 73132. In lieu of flowers, please send donations to Metro Baptist Church – Building fund. To send flowers or a memorial gift to the family of Val Ray Miller please visit our Sympathy Store.
To order memorial trees or send flowers to the family in memory of Val Ray Miller, please visit our flower store.