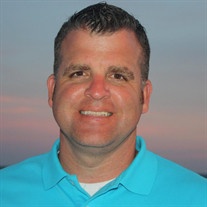 Life Celebration Service Tuesday, January 3rd, 2017 - 05:30 PM - Faith Bible Church 600 N. Coltrane - Edmond, OK - 73034 Tracy Lynwood Spann was born on May 22, 1972 in Bastrop, Louisiana; and passed away on December 30, 2016 at Oklahoma University Medical Center in Oklahoma City at the age of 44. Tracy is preceded in death by maternal grandparents, Buron and Estelle Armstrong; paternal grandfather, L.E. “Babe” Spann; and cousins Teri Bryan Romero and Samuel Paul Sanders. He is survived by his wife of 20 years, Jennifer Mathis Spann, daughter, Karli Mathis Spann, and son, Jackson Edward Spann, all of Edmond, Oklahoma; parents Bruce and Debbie Spann and paternal grandmother Carolyn Spann, all of Bastrop, Louisiana; sister Carole Spann, niece Alison Withers, and nephew Henry Spann, all of Monroe, Louisiana; and numerous aunts, uncles, and cousins. Tracy graduated from Bastrop High School in 1990. He joined the Navy and graduated number one in his class from the US Navy Hospital Corps School in Great Lakes, IL in 1994. He was an honor graduate at several other Navy schools during his naval career. He served as a hospital corpsman at Corry Station Branch Medical Clinic in Pensacola, FL from December 1994 to June, 1996, when he moved to Camp LeJeune, NC. While he was stationed there, he and Jennifer married on November 23, 1996, and they lived in New Bern, NC for two years. After serving four years in the Navy, Tracy joined the Louisiana Army National Guard and he and Jennifer moved to Baton Rouge, LA. While living there, they welcomed their daughter, Karli in May of 2000. He completed Officer Candidate School, and in 2002 served on active duty in Operation Enduring Freedom in Bagram, Afghanistan as an Executive Officer, Second Lieutenant with Alpha Co, 769th Engineering Battalion. In April of 2007, they completed their family with the birth of Jack. He graduated with a Bachelor of Science in Nursing in 2004 from Southeastern LA University in Hammond, LA. He was an ICU nurse at Baton Rouge General Medical Center before returning for an Advanced Practice Degree in Anesthesia. He earned his Master of Science in Nurse Anesthesia in 2009 from Our Lady of the Lake College in Baton Rouge, LA. He and his family then moved to Edmond, Oklahoma where he began his career as a CRNA (Certified Registered Nurse Anesthetist) at Oklahoma University Medical Center. He was most recently contracted with Integris Southwest Medical Center as chief CRNA. In keeping with Tracy’s loving and generous spirit, it was his decision to give life through organ donation so that others may live. A celebration of Tracy’s life will be held at 5:30 PM on Tuesday, January 3, 2017, at Faith Bible Church in Edmond, OK, with a reception to follow An additional celebration of Tracy’s life will be held in Bastrop, LA at First Baptist Church on Friday, January 6, 2017, at 5:30 PM, with a reception to follow. To send flowers or a memorial gift to the family of Tracy Lynwood Spann please visit our Sympathy Store.
To order memorial trees or send flowers to the family in memory of Tracy Lynwood Spann, please visit our flower store.