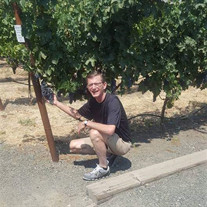 Timothy Moen, 59 of Oklahoma City, went to be with his Lord and Savior Monday, February 17, 2020. He was born in Oklahoma City on June 28, 1960 to the late Ronald T. Moen and Veronica R. (Brunette) Moen. He grew up in Oklahoma City where he was a member of St. James Catholic Church his entire life. He lived his faith by building strong friendships that continue to this day. He lived his faith with and through his family as well. He was the most natural caregiver for his family, and he spent countless times being the fill in person for the whole family, teaching many to ride a bike or supporting them through every hardship. He graduated from U.S. Grant High School in Oklahoma City in 1978. He enjoyed playing tennis, playing at Rose State College, listening to Rock n’ Roll, and the game of golf. He married the love of his life, Connie C. McNish, on September 18, 1981. They remained married for 35 years before Connie’s passing in 2016 while living in New York. In addition to his parents and wife, he was preceded in death by his brother Mickey Moen, sister Mary Clay and her husband Ronnie Clay, niece Anna Cronquist, and nephew Turner Moen, along with his father-in-law Albert McNish. Left to cherish his memory are his daughter and son-in-law, Cara and RJ McComb; son and daughter-in-law, Andrew and Ashley Moen; grandchildren: Blayne, Jasmine, Alexia, Mia, and Matthew; brother, Dan Moen and his wife Trish; sister, Kristi Cronquist and her husband Stan; mother-in-law, Wanda McNish; and numerous nieces and nephews. He is also survived by long-time friends, Dave Voorhees, David Langley, David Stiner, Noel Brooks, and Clint Bidwell. The family would like to thank Dr. Razaq and nurse Jessica for all their care provided to Timothy. A wake will be held Friday, February 21st at 7:00 PM at St. James the Greater Catholic Church, 4201 S. McKinley Ave, Oklahoma City, OK. Mass will be Saturday, February 22nd at 10:00 AM at St. James the Greater Catholic Church with Rev. Bill H. Pruett officiating. Burial will follow in IOOF Cemetery in Watonga, OK at 1:00 PM. Condolences may be expressed with family at www.CorbettFuneral.com. To send flowers or a memorial gift to the family of Timothy Moen please visit our Sympathy Store.
To order memorial trees or send flowers to the family in memory of Timothy Moen, please visit our flower store.