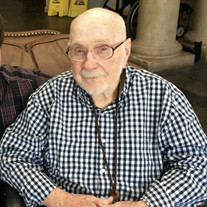 Graveside Service Friday, October 25th, 2019 - 10:00 AM - (CDT) - Fort Gibson National Cemetery - Ft Gibson 1423 Cemetery Road - Ft Gibson, OK - 74434 Thomas Jefferson Daniel, Jr., August 30, 1923 - October 18, 2019 Jeff, as he was affectionately known, was called home on October 18, 2019. He was born on August 30, 1923, in Muskogee, Oklahoma, the hospital closest to Wagoner where the family lived. He was the last of five children born to Mae Edith Bratton Daniel and Thomas J. Daniel, Sr. The family moved to Tulsa during the Great Depression where Jeff was raised. He graduated from Tulsa Central High School. He then attended OU and was a member of the Alpha Tau Omega fraternity. He left OU to serve his country as a Naval Officer in World War II. He later served during the Korean War as the Executive Officer on a troop transport ship. He attended Doane College in Lincoln, Nebraska and later graduated from the University of Tulsa. Jeff was so proud to be a Sooner and a “Tulsan.” He loved OU football. Jeff also loved art and music and was an accomplished artist. Although he spent the final few years of his life at the Norman Veterans Center, Jeff died as a member of First Christian Church in Tulsa where he sang in the choir well into his eighties. All four of Jeff’s sisters predeceased him, Marion, Frances, Dorothy and Margaret. He was married to Corina who preceded him in death and they had two children, son Tom, and daughter Maria who also predeceased him. Jeff is survived by Tom and Tom’s long-time companion Shawn Braden, both of Oklahoma City, granddaughter Riley and grandson Corbin, both of Oklahoma City, grandson Chip of Dallas, great grandson Thomas of Oklahoma City, his beloved nieces and nephews, David, Ann, Margy and Dan, and multiple great nephews and nieces To send flowers or a memorial gift to the family of Thomas J. Daniel Jr please visit our Sympathy Store.
To order memorial trees or send flowers to the family in memory of Thomas J. Daniel Jr, please visit our flower store.