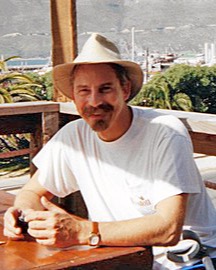 Tom was a beloved son, brother and uncle. He graduated with a Bachelor of Music degree from University of North Texas. He was immensely talented and could play just about any instrument in the orchestra. His passion for music took him to Windhoek, Namibia where he worked as a music producer for the South West African Broadcasting Corporation for several years. He continued his studies in Philosophy at the University of South Africa.

After returning to the states he received a Juris Doctor degree from Oklahoma City University School of Law in 1995. Tom was intelligent, articulate and had a quick wit that will be deeply missed by all who knew and loved him. He loved baseball, music and his cat, Sparkle.

Thomas passed away on January 21st, 2023 in Oklahoma City, Oklahoma.

He is survived by his sister and brother-in-law Alisa and Todd Hunter of Burleson; nephew Tate Hunter; aunt, Dorothy Taylor; and cousins Kim McGehee, Dennis Taylor and Teena Wright as well as many loving friends.

He is preceded in death by his parents, Mary and Harold Alam, and sister, Connie S. Alam.

To order memorial trees or send flowers to the family in memory of Thomas Harold Alam, please visit our flower store.