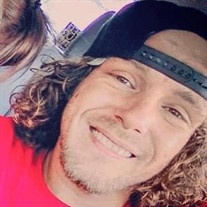 Tanner R. Green Wright of Oklahoma City, Oklahoma passed away August 13th, 2020. Tanner was born on May 7th, 1991 to Sabrina Green and Darryl Wright. To know Tanner, was to love Tanner. He was a hardworking man and a true provider for his family. He was a protector to the ones he loved and was always the life of the party. Tanner worked as a plumber for over 10 years and could do ANYTHING with his expertise. He spent his life working to provide for his family and all of his free time was dedicated to his boys enjoying some of the simplest of pleasures, such as fishing or playing XBOX, making anything they did together an awesome adventure. Tanner was always the most fun to be around no matter what he was doing. He LOVED his dogs and worked extremely hard to give his boys a good life, in spite of his own childhood being cut so short. At a very young age, Tanner had been faced with many hardships, but we are grateful to our Lord and Savior that he rests peacefully with his Mother and grandmother whom he loved so dearly. Shortly after the death of his mother at the age of 17, David and Elisabeth Bassett took Tanner into their home and offered Tanner a fighting chance. Tanner admired David Bassett who influenced him to be the strong, male family role model that inspired the love and dedication he gave to his own family. Presented with the opportunity as a plumber’s apprenticeship, Tanner stayed the course and became a licensed plumber. It was amazing to watch Tanner seize that opportunity and become the family man he always wanted to be. He took great pride in his work and family. He made life so good for so many people just by knowing him. Later, in his adult life, Tanner was able to reconnect with his father. His family takes great peace knowing he got the chance to form a bond and connection with his father. Tanner made his youngest and only sister feel as if she was the luckiest girl in the world to have had him as her brother. Tanner was preceded in death by his loving mother Sabrina, his maternal grandparents Dawna and Leland Green, and his paternal grandparents Frankie Mae and Kenneth Gene. Tanner is survived by so many that loved and cherished him. His wife, Keely Shae and his first born son, Tanner Ray Jr.; his former wife Amanda and their sons, Justin, Payden and Johnny. Also, his sister Taylor Renae Barnes; and his loving mother and father-in-laws who adored him entirely. Tanner is also survived by many nieces and nephews as well as many special friends. The Funeral Service will be held at Corbett Funeral and Cremation, 807 W Wilshire Blvd, Oklahoma City at 4:00pm, Tuesday, August 25th, officiated by Doug Serven. Visitation will be one hour prior to service at the funeral home. Cremation will follow and Tanner will be laid to rest in Kansas with his mother and his Grandmother. To send flowers or a memorial gift to the family of Tanner Ray Green Wright please visit our Sympathy Store.
To order memorial trees or send flowers to the family in memory of Tanner Ray Green Wright, please visit our flower store.