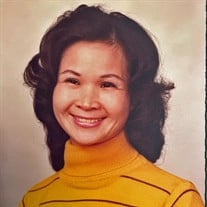 Shu Mei Adams was born in Tainan, Taiwan on January 2, 1941 to Su-O Lee and Jay Tee Zhao. She had two brothers. While working as a barber, she met Robert Cook, USAF. They married in 1965 and had two children, Kathy and Robin. In 1974, they moved to the United States, stationed at Whiteman AFB, Missouri.  After 20 years of marriage, they divorced. In 1985, Shu Mei married Joe Adams and moved to Oklahoma City.  They remained married until Joe's passing in 2015. Shu Mei loved playing Bingo, cooking, watching game shows and pro wrestling. Her greatest love were her children and grandchildren. Her grandchildren called her Ahma. Most of Shu Mei's life was spent being a homemaker. Shu Mei was the kindest person you will ever meet. You couldn't leave her house without her cooking something for you or her sending you home with chocolate. She is proceeded in death by her husband, Joe Adams, her parents and her brothers. Shu Mei is survived by her daughter, Kathy Gradnigo, son, Robin Cook (Megan); grandchildren: Trey Gradnigo, Alli Gradnigo, Ella Cook and Nicholas Cook; step-grandchildren: Payton, Claire and Harper Ginter; stepchildren: John Calvin Adams and family, and Joey Adams and family; step-grandchildren: Natasha Adams and family, Natalie Adams and family, Lauren Adams Caddel and family and Cori Adams Sheets and family; "other daughters": Connie Judd-Sullivan, Brandi Cook, Jenny Davis and Dana Buckles-Hunn; "other sons”: Edward Chatman and Jeff Trujillo. Her smile and heart for others will be greatly missed. Rest In Peace, Ahma. To send flowers or a memorial gift to the family of Shu Mei Adams please visit our Sympathy Store.
To order memorial trees or send flowers to the family in memory of Shu Mei Adams, please visit our flower store.