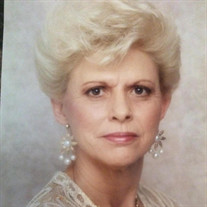 Sherryl Shirlene Wright, 75, of Midwest City, Oklahoma was born on October 19, 1943 in Woodward, Oklahoma to Clara Madge Duble and Ezra Duble. She passed away on July 18, 2020 Sherryl attendee school in Buffalo, Oklahoma and moved to Oklahoma City in 1970. She modeled for Streets Fashion Department Store and later was a Marketing Representative for United Dental Care. Sherryl was preceded in death by son Kem Jay Strickland, her daughter Christina Strickland, parents Clara M. Duble, Ezra Duble and her sister Shirley Thomas. She is survived by her brother Ronnie Duble (Clara) of Del City, Oklahoma and many nieces and nephews, other family members and friends. A Graveside Service will be held 10:00 A.M. Friday, July 31st at Chapel Hill Memorial Gardens in Oklahoma City, Oklahoma. To send flowers or a memorial gift to the family of Sherryl Shirlene Wright please visit our Sympathy Store.
To order memorial trees or send flowers to the family in memory of Sherryl Shirlene Wright, please visit our flower store.