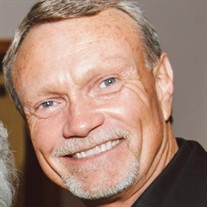 Richard Layton Rains Richard Layton Rains passed away August 10, 2021 at the Integris Hospice House in Oklahoma City. He fought a giant battle with cancer, but he fought with honor, love, and a determination to heal. Richard was born January 2, 1955 in Fort Morgan, Colorado to George Rains and Rowena (Young) Foster. He attended the United States Military Academy at West Point and Oklahoma State University. He spent 31 years working for Irby Electrical Wholesale. Richard was an avid sports fan. He spent many years coaching pee wee football in Hennessey, OK. He also played and coached softball in Enid, OK. Richard followed all OU sports, but football was his favorite. He married the love of his life, Darci Rains on June 3, 2000. He was just starting retirement and had plans to spend time with the grandkids. Richard is preceded in death by both parents and a brother, Jerry Rains. Surviving are his wife Darci Rains of Yukon, OK, sister Patty Rains of Hennessey, OK, son Preston Montgomery and wife Angela of Bloomington, IL, daughter Tiasha Redus and husband Austin of Piedmont, OK, and his four grandchildren Landon Montgomery, Kayson Montgomery, Emery Redus, and Cora Redus. Richard was a wonderful, loving husband and a very proud Grandpa. He touched so many hearts and will be tremendously missed by family and the many friends he has made through the years. In lieu of flowers, donations may be made to the charity of your choice. To send flowers or a memorial gift to the family of Richard Layton Rains please visit our Sympathy Store.
To order memorial trees or send flowers to the family in memory of Richard Layton Rains, please visit our flower store.