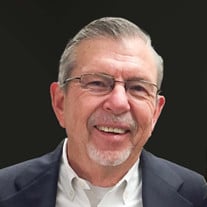 Ralph A. Bauer, 77, Oklahoma City, OK, passed away in peace on Wednesday, December 22, 2021. Ralph was born on September 7, 1944 in Bauxite, AR. He later lived in North Little Rock where he went to high school and college. Ralph attended University of Arkansas, Little Rock, and graduated with a B.S degree in Business Administration in 1982. Ralph served in the U.S Army Reserves for six years with an honorable discharge. Ralph’s love for sports began when he was a young boy. He was known for being a superb athlete, with a special love for baseball. He would spend hours outside. This carried over into his adult life where Ralph was known to mow the yard and rake the leaves, daily sometimes, just to be close to nature. Anyone who worked alongside Ralph would be blessed with lessons on tree trimming and branch breaking. Some even referred to him as a "tree whisperer".  Ralph married Cindy Goldman on February 14, 1998, and brought a solid, stable foundation into the family which included moving Cindy’s daughter’s family across the street from them.  Ralph and Cindy built an extraordinary life together in the inner city of Oklahoma City. They established their home in the historical Gatewood neighborhood where they rehabilitated many older homes to provide opportunities for new families moving into the revitalizing area.  Ralph began his business career at Aetna Life & Casualty, in Tulsa, OK, in 1972 where he was honored as National Employee of the Month out of 39,000 employees. He was also awarded Marketing Representative of the year. Ralph was proud of his career at Aetna and would often speak fondly of his accomplishments and the lessons learned during his time there. Ralph continued in the insurance industry until 1983 when he went to work for the U.S. Bankruptcy Court. Ralph took this responsibility seriously and it made an impact on him that he would share with others later in life regarding lessons in fairness, humility, responsibility and finances. He also spent five years as an independent oil producer in Tulsa, OK. In 1990, Ralph began his longest career at the Oklahoma Corporation Commission. He held many positions during his twenty-five years there: Regulatory Program Manager, Consumer Complaint Investigator, Railroad Investigator and Compliance Officer. During his time there, he received the Governor’s Award for Outstanding Service.  No words could ever capture Ralph’s life. You had to experience him. Ralph’s greatest traits were his compassion and generous nature. Ralph’s personal mission was to exhort and encourage anyone and everyone he met. He went out of his way to create encounters with people and believed that his wisdom and life lessons were meant to be shared if they could help someone. His conversations with others always included his love for God and his wife, Cindy. Ralph became a Lay Pastor at First United Methodist Church in Oklahoma City and served at Life Church for many years. For the rest of his life, he continued serving at other churches here and abroad. He was never too busy to love. A kindness Ralph once performed for a family who had no heat during a very cold winter, became a front-page story in the Daily Oklahoman on Christmas Day, 1993. Family, friends and strangers alike were all touched by his counsel, encouragement and straight talk.  Ralph is survived by his wife of twenty-three years, Cindy Goldman Bauer; his daughter, Kimberly Zapata (Eric); his son, Brooks Allan (Colleen); his grandchildren, Makayla Miller, Caleb Miller, Jacob Allan and Morgan Allan; his stepdaughter, Amey Reynolds (Richard); and step grandchildren, Courtney Strothers and Emma Strothers. Ralph was preceded in death by his parents, Arba E. Bauer, Jr. and Juanita Bauer, and his sister Carolyn Clark.  Memorial services will be held in March of 2022 at Britton Christian Church in Oklahoma City. A date and time will be provided here once determined. To send flowers or a memorial gift to the family of Ralph A. Bauer please visit our Sympathy Store.
To order memorial trees or send flowers to the family in memory of Ralph A. Bauer, please visit our flower store.