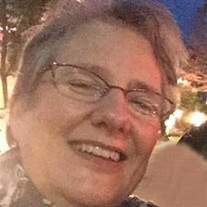 Prayer Service Thursday, June 22nd, 2017 - 07:00 PM - Saint John Nepomuk Catholic Church 600 Garth Brooks Blvd - Yukon, OK - 73099 Funeral Mass Friday, June 23rd, 2017 - 10:30 AM - Saint John Nepomuk Catholic Church 600 Garth Brooks Blvd - Yukon, OK - 73099 Peggy Pope, 65, of Yukon, passed from this world on Saturday, June 17th, 2017, in the presence of family and friends. Her last hours passed peacefully in the Integris Hospice House of Oklahoma City, the very facility to which she had dedicated many years of faithful service. As a hospice chaplain, Peggy worked tirelessly, comforting and supporting her patients, their families, and their loved ones. Her life’s work was to extend the shelter of her kindness and to provide care to those around her. She was, by turns, many admirable things: an avid reader and a lover of flower gardens; the most accomplished of listeners and an able advisor; a patient and supportive friend; a wife who was, somehow, actually always right; and a mother devoted to the well-being of her children. Born on November 21st of 1951 to James and Josie Nault, Peggy was the eldest of five siblings. Naturally, she assumed a great deal of responsibility early – a habit that would endure. Peggy would choose to be responsible for the care of others for all of her 65 years. Peggy was firm in her convictions and keen in her perceptions. Her devotion to family, a deep and abiding faith, her sense of right and wrong, and her willingness to speak the truth took root in the farmlands of Oklahoma. In June of 1967, Omega’s schoolhouse was destroyed by a tornado and the towns of Loyal and Omega were forced to combine resources and create the Lomega school system, where she met her husband-to-be, Scott Alan Pope. She graduated as valedictorian in 1970 and they married in September of 1972. Their marriage of nearly 45 years was the joy of her life. In her heart, family came first. Peggy devoted the next years to her children. Her son, Anthony, was first, followed by daughters Tracie and Rebecca, and her fourth, Dhebra (her adopted granddaughter). Even as she raised them, she heeded a call to other kinds of service. A devoted and lifelong Catholic, Peggy cared for her faith community. Peggy practiced that faith with those around her as a teacher, a mentor, and a leader in her faith community. She founded the Journey of Faith program at Holy Spirit parish, worked with the RCIA program at St. John Nepomuk, was employed as a Director of Religious Education, and served in Stephen Ministries. As she continued to learn and grow in her faith, Peggy’s study of Pastoral Ministry led to her vocation as a chaplain. She touched many hundreds of lives through this ministry. Peggy is survived by her devoted husband, Scott Alan Pope, of Yukon; her four children, Anthony, Tracie, Rebecca, and Dhebra; her mother, Josie Nault of Watonga; sister Donna and brothers David, Walter, and Michael; as well as dozens of nieces, nephews, and cousins. Although her presence will be dearly missed, Peggy’s legacy survives. Her work continues as the memory of her life remains in those whose hearts she touched. To send flowers or a memorial gift to the family of Peggy Ann Pope please visit our Sympathy Store.
To order memorial trees or send flowers to the family in memory of Peggy Ann Pope, please visit our flower store.