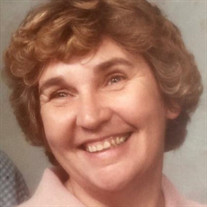 Service will be held March 21, 2020 3:00PM Corbett Funeral and Cremation 807 W Wilshire BLVD OKC OK 73116 Olean Louise (Olson) Elledge, 85, of Bethany Oklahoma passed away on March 10th after a valiant battle with cancer. Olean is survived by her life partner Dick Sjoberg; her children Don Allen Elledge, Teresa Ann (Elledge) Johnson, and Roy Dean Elledge; her ten grandchildren; many great grandchildren; her former spouse Don Elledge; and several nieces. She is predeceased by her parents Ollie and Emma (Seiling) Olson; her brothers Alvin and William (Bill) Olson; and her sister Ida Mae (Olson) Hinton. Olean was born April 11th, 1934. She graduated from Capitol Hill High School in 1951. During her first marriage, Olean lived in many interesting places including California, Reno and a farm in Oregon that required them to hand pump water from a well. Olean had an incredible sense of curiosity and adventure that she instilled in her children, grandchildren and great grandchildren. She would take her children, and eventually her grandchildren to the lakes and rivers to search for old jars and arrowheads. She had a kind heart for stray animals, offering them food and a home to call their own. While Don and Olean separated, later in their lives they were able to mend their friendship and bring harmony to the family. Olean was a woman who found purpose in working hard. While raising her own children she would earn money by watching children in her neighborhood. Later in life she was employed by the IRS and eventually by the United States Postal Service where she retired in her late seventies. Forty years ago, Olean found love in her relationship with her partner Dick Sjoberg. Together they enjoyed many crafts, camping and traveling. One such adventure took them on a two week exploration of the country by train. Later in life they could often be found on the family land, enjoying nature and time spent together. Olean fiercely loved her family. She was actively involved in the lives of her children, grandchildren and great grandchildren. Holidays were often celebrated in her home. She will be deeply missed by her friends, family, and those who were blessed to know her. To send flowers or a memorial gift to the family of Olean Louise Elledge (Olson) please visit our Sympathy Store.
To order memorial trees or send flowers to the family in memory of Olean Louise Elledge (Olson), please visit our flower store.