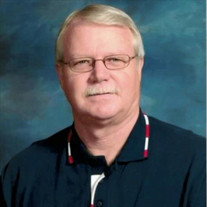 Michael passed peacefully at home the evening of February 10th. He was surrounded and supported by his loving family during the last days of his life. Mike was born in Pittsburgh, KS, March 7, 1949 to Sam and Mary Daugherty. The family moved to Oklahoma City when Mike was very young. Mike was proud to be a career firefighter for the Oklahoma City Fire Department. When he retired from the department he built a shop in his backyard and built hot rods full time. In his youth he discovered a passion for bowling which never left him. He became very accomplished at the sport and bowled in many area leagues throughout his career. Michael is survived by his wife Teresa and two daughters (and spouses): Michelle Leach (Bo) and Christy Beatty (Chris); four grandchildren: Colt Leach, Kaitlan Beatty, Mason Beatty, and Dawson Beatty. He was preceded in death by his brother Sammy and both his parents. A celebration for Mike is scheduled for 2pm on February 20th at Coles Garden 1415 NE 63rd St OKC. The family would prefer donations to the Parkinson’s Foundation (parkinsonoklahoma.com) in lieu of flowers. To send flowers or a memorial gift to the family of Michael Eugene Daugherty please visit our Sympathy Store.
To order memorial trees or send flowers to the family in memory of Michael Eugene Daugherty, please visit our flower store.