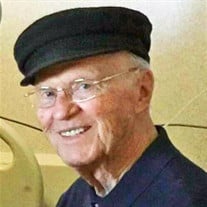 Marvin Lee was born on Nov. 13, 1927, to Marvin T. Parmer and Threcy Carter on a kitchen table near Greenwood, AR. Threcy did not survive the birth. Marvin Lee was raised by his grandparents with seven uncles on a farm. He left Arkansas at the age of 15 for California. It was in California he spent his days working in a bakery until he was old enough to join the Navy. While serving in the South Pacific, he began corresponding with Anita L. Boyd. They entered into Holy Matrimony Dec. 18, 1948. They started a family with a daughter, Theresa, born May 21, 1950, and then a son, Michael, born April 27, 1953. He helped to nurture, educate and protect his family that grew into seven grandchildren, Myki, Mandy, Matt, Mason, McClaine, Justin, and Michaela; plus spouses; and 11 great-grandchildren. Dad had many achievements in life as an entrepreneur and author. He and Mom had several business ventures together. Late in life, he published his memoir entitled "Precious Memories." He was preceded in death by his loving wife of over 63 years, his parents, grandparents and uncles. Survivors include his daughter, Teese Mullings and her husband J. Mike; his son, Michael and his wife Becky; seven grandchildren and 11 great-grandchildren; and many loving friends. A Memorial Service is planned for Monday, April 17, 2017, at the Metropolitan Baptist Church in Oklahoma City at 10 a.m. In lieu of flowers, the family requests donations be made to Whiz Kids of Oklahoma at whizkidsok.org or 923 N Robinson, OKC, OK 73102. To send flowers or a memorial gift to the family of Marvin Lee Parmer please visit our Sympathy Store.
To order memorial trees or send flowers to the family in memory of Marvin Lee Parmer, please visit our flower store.