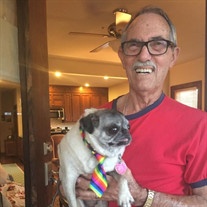 Lloyd Henry Stidham, 81, passed from this life into the arms of his Savior in Heaven on December 14, 2020. Born in a tent on Sept. 17, 1939, to James Henry and Lennie Loudella (Rice) Stidham, Lloyd entered the world in Chandler, Arizona. He was the youngest of 10 siblings, and grew up on the family farm, graduating from Stroud High School. Lloyd worked for the Oklahoma Department of Transportation in the Construction Division from 1970 until 1994 before retiring. A few months later he returned and worked for the same Department and Division part time for another 26 years. Lloyd was a longtime member of Expressions Church, where he enjoyed singing on the praise team, serving as church secretary, and even helped clean the sanctuary with his husband of 13 years, Robert Hardy. Never one to sit still for long, he also volunteered as a receptionist for Expressions Community Center. Lloyd loved the outdoors, taking walks, enjoying the company of family and friends, dining out, and singing along to gospel music. He adored his Volkswagen Beetle, and his and Bob's beloved pug, Abby, who died in October. Lloyd was preceded in death by his husband Bob Hardy in 2015, both parents, five brothers, and 3 sisters. He is survived by 1 brother Bobby Stidham and wife Alice of Sperry, OK, brother-in-law Bob Clark, of Midwest City, OK, stepdaughters Kimberly Siegrist and Jennifer Hardy of Tulsa, OK a host of nieces and nephews. Others include Lloyd’s adoring niece Brenda Allen of Oklahoma City, OK, best friend Maurice Jones of Oklahoma City, OK and beloved pastor Neill Coffman of Norman, OK. Friends & family are invited to view and bid farewell to Lloyd at Corbett Funeral & Cremation 807 W. Wilshire Blvd., OKC, OK 73116 between 9-5 Friday, Dec. 18. To send flowers or a memorial gift to the family of Lloyd Henry Stidham please visit our Sympathy Store.
To order memorial trees or send flowers to the family in memory of Lloyd Henry Stidham, please visit our flower store.