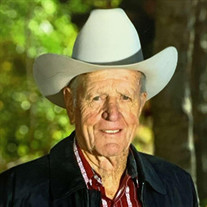 Lannis Sutton, also known as L.E., two-stepped his way into heaven at the age of 94 years on March 25, 2021, with the tune of his Lord and Savior Jesus Christ calling him home. L. E. was born on October 2, 1926 in Cheyenne, Oklahoma to Lannis Fountain Sutton and Johnny Colleen Chance. He was the fourth of five children and the youngest of three brothers. Raised in western Oklahoma, he joined the United States Navy in 1944 at the tender age of 17, concealing his young age so as to fight for his country in World War II, alongside his two brothers, who nicknamed him “Runt” – a name stuck with him throughout his life. All three Sutton brothers served bravely, and all three returned from the war as heroes. Upon his return from the war in 1946, he met and married and married the beautiful Betty Jo Shuler. Together, they had three children: Lana Jo Turk, Darrell Lynn Sutton, and Karen Gaye Beck. L.E. provided for his family as an expert plumber and cattleman. After beginning work as an apprentice plumber, he very soon obtained his master’s plumber’s license that led to his founding and managing his own plumbing company. When the Korean War later arrived, L.E. was called back by the Navy to serve aboard a ship. Once again, he served his country valiantly. When he returned home, he and Betty Jo, along with their children, settled in Oklahoma City, where L.E. continued his work as a master plumber while also raising cattle at his farm outside of Blanchard. To all of his many nieces and nephews, “Uncle Runt” was known for his passion for country music dancing and especially for Bob Willis music. His entire family appreciated his strong work ethic and his ability to continue farming into his 90’s. He loved his family and always enjoyed special holiday gatherings. L.E. was preceded in death by his parents, his sisters Willie Mae Owens and Lily Faye Roundtree, and his brothers Thomas Hudson Sutton and Dallas Minor Sutton. He was also preceded by his son, Darrell Sutton, and his daughter, Lana Jo Turk. He is survived by his daughter, Karen Beck; by his six grandchildren: Jana Turk, Jason Turk, Darrell Lynn Sutton Jr, Shane Sutton, Matthew Howard, and Kathryn Howard Elliott; by his six great-grandchildren: Melodie Turk, Maeghan de la Roasa, Auna Sutton, Derrick Sutton, Shane Sutton, Jr. and Lane Sutton; and by one great-great-granddaughter, Mireya de la Rosa. He is also survived by his very special friend, encourager and dance partner, Millie Sullens, as well as a host of nephews, nieces, grand-nephews and grand-nieces. He will be sincerely missed, until he is joined in heaven by those he leaves behind. In lieu of flowers, please consider making a donation to Canadian County Cowboy Church. To send flowers or a memorial gift to the family of Lannis E Sutton please visit our Sympathy Store.
To order memorial trees or send flowers to the family in memory of Lannis E Sutton, please visit our flower store.