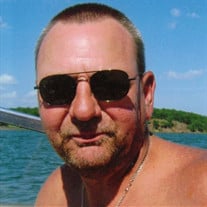 Funeral Mass Friday, January 4th, 2019 - 11:00 AM - Epiphany of the Lord Catholic Church 7336 W. Britton Road - Oklahoma City, OK - 73132 There will not be a public viewing and the graveside portion of his service will be for family and close friends only. John Derek Chesser (Derek), 47, of Piedmont, Oklahoma passed away at Baptist Hospital in the early hours of December 31, 2018 with his beloved wife Tonya Chesser by his side. Derek was born on February 10, 1971 in Oklahoma City, and was the son of Sharyn Chesser and the late John Chesser. Derek grew up in Yukon and graduated from Yukon High School. Derek went on to obtain welding certificates from the VoTech and went on to weld aluminum horse trailers for 23 years for Elite Trailers. In 1991 Derek started dating the love of his life Tonya Chesser and in 1993 Derek and Tonya were married in Yukon, Oklahoma. Derek later adopted Kendon as his son. Derek found a love he never knew before when his granddaughter Madison was born. Madison became the light of his life until the day he passed. Derek is survived by his wife of twenty seven years Tonya Chesser, their son Kendon Varner and his granddaughter Madison Varner; mother Sharyn Chesser; his sister Tamera Vile and her husband Lenny Vile; his nephew Adam Kuykendall and two great nephews. A special thanks is given by the family to the staff of Baptist Hospital for all their help, patience and laughs. You all were so great to him in his final days and did everything to help him be comfortable. To send flowers or a memorial gift to the family of John Derek "J.D." Chesser please visit our Sympathy Store.
To order memorial trees or send flowers to the family in memory of John Derek "J.D." Chesser, please visit our flower store.

Epiphany of the Lord Catholic Church