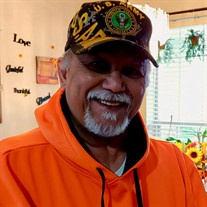 John DeCorte III was called home on October 1, 2021. He was born on December 18, 1944 in Honolulu, Hawaii to Margaret (Harry) Angel and John DeCorte, Jr. He enjoyed 47 loving years with his beloved wife Marlene, and together welcomed four children into the world; Jeanna, John IV, Joseph, and Michelle. John would spend time enjoying the outdoors while hunting and fishing, using his hands to paint, woodwork, and craft, but he especially loved spending time with his family and doing the work of the Lord! John was preceded in death by his mother Margaret, father John, and brother Robert, and is survived by his four children, Jeanna DeCorte, John DeCorte IV and his wife Melissa, Joseph DeCorte and his wife Delilah, and Michelle DeCorte; sister Lorraine Galindo and brother Harry Angel Jr.; and his eight grandchildren, Josiah, Jada, Joseph, Jolya, Lilly, Michael, Makayla, and Arianna. To send flowers or a memorial gift to the family of John Decorte III please visit our Sympathy Store.
To order memorial trees or send flowers to the family in memory of John Decorte III, please visit our flower store.