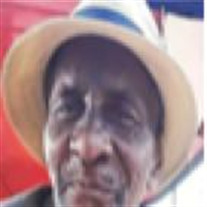 John Wesley Brown was born to the proud parents, Richard and Theresa Brown, in Castle Oklahoma, on January 24, 1948. His family later moved to Wichita Kansas where he attended Wichita public schools. As a child John Wesley would attend Ebenezer Methodist Church. Later in life he married Mable Brown and to this union two children were born. He worked in the Janitorial and carpentry industries. Some of his hobbies were spending time with friends and family, lifting weights, working on automobiles and helping others with whatever they needed. He had such a sense of humor, “EVERYBODY” loved talking and laughing with him. Those who proceeded him in death were: father, Richard Brown, mother, Theresa Brown, brothers, Harold Oliver Brown (Sonny), Sylvester Brown. John Wesley leaves to cherish his memories: wife, Mable Brown of Michigan; son, John Wesley Jr., of Michigan; daughter, Lisa Baker (Bertram), of Wichita; sisters, OlaMay Thomas, of Wichita, Iceola Briggs of Oklahoma, brothers, Richard Brown (Florida) of Wichita, Mark Wayne Brown of Oklahoma, grandchildren; great-grandchildren; and a host of nieces, nephews, cousins, and friends. To send flowers or a memorial gift to the family of John Wesley Brown please visit our Sympathy Store.
To order memorial trees or send flowers to the family in memory of John Wesley Brown, please visit our flower store.