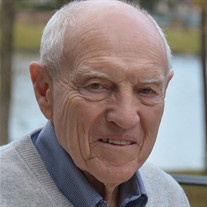 Jim J. Northcutt passed away on October 31, 2019 following a short battle with cancer. He was born October 7, 1932 in Pryor, Oklahoma to his parents, Charles and Jewell Sharp Northcutt. Jim graduated from Retrop High School in Oklahoma in 1950. He attended Oklahoma A&M (now OSU) for two years before transferring to Southwestern State in Weatherford, Oklahoma where he received a Bachelor's of Science degree with majors in Biology and Physical Education in 1954. Jim and Darlene Hale were married on April 18, 1954 in Sentinel, Oklahoma. Because he was eligible for the draft at the time, he volunteered to go to the army. After he was released in 1956, but was officially discharged in 1962 after serving in the reserves, he and Darlene moved to Brownfield, Texas, where they both taught school for two years.Later they moved to Amarillo, Texas and Jim received his Master of Science degree from West Texas State University. They then returned to Brownfield where he was employed by the Texas State Health Department for the next six years. The following 30 years were spent as the Director of Environmental Health and Safety at Texas Tech University in Lubbock, Texas. He began and developed the Environmental & Safety programs for the university and health science programs there. He served as the President of the Texas Environmental Health Association and as Vice President of the National Environmental Health Association. He served on several local, state, national committees, and boards. For several years Jim was active at the Second Baptist Church in Lubbock, Texas and then after moving to Oklahoma City, in the Joy Sunday School Class of the Quail Springs Baptist Church.His interests included traveling, fishing, camping with RVs, watching sports, gardening, and especially visiting with family and friends. He and Darlene were able to visit all 50 states and many foreign countries. In 2013 they moved to Epworth Villa, a lifecare facility in Oklahoma City to be nearer family members. At Epworth he had a garden and volunteered in several areas on the campus. Jim had a strong work ethic, and was known for his character, honesty, gentleness, Christian attitude toward others in his day to day living and his love of family. Jim is survived by his wife of 65 years, Darlene, son Craig and wife Janie, of Edmond, Oklahoma, son Bruce and wife Karen of The Woodlands, Texas; brother Glen Northcutt of Oklahoma City, four grandchildren, Zachary, Tyler, Natalie, and Kacey Northcutt and great-children, Yassiel, Bennett, Emma Wren, and Nora Northcutt. He was preceded in death by both his parents and his brother, Jack. His memorial service will be held at 2:00 p.m. on Thursday, November 7, 2019 at Quail Springs Baptist Church in Oklahoma City. In lieu of flowers, donations may be made to Quail Springs Baptist Church, Epworth at Home Hospice, or the charity of your choice. To send flowers or a memorial gift to the family of Jim J. Northcutt please visit our Sympathy Store.
To order memorial trees or send flowers to the family in memory of Jim J. Northcutt, please visit our flower store.