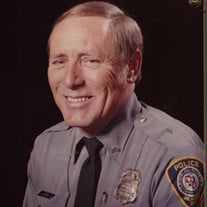 Jerry Eldon Gates was born January 12th, 1941 and left us on Monday the 20th of January 2020 to get an early start on his garden. Although we’ll miss him so much, we all know where he is we know we’ll see him again one day. Jerry was a veteran of the USAF and retired officer of the  Oklahoma City Police Department, receiving the Medal of Valor in 1983. He served both his country and his city with pride. He also coached little league soccer, baseball and softball for his children. He was preceded in death by his brother Ronald Gates, sister Alice Burdg and nephew Eric Gates. He leaves behind his wife of 55 years, Sharon and his daughters Debbie Schuh of Oklahoma City, Jennifer Darby (Chase) of Arkansas City, KS, son Jody Gates (Amy) of Longmont, CO, sister Sherry Gates Ewing of Oklahoma City and sister-in-law Cindy Gates of Oklahoma City. He also leaves 15 grandchildren, 1 great-grandson. Jerry had a multitude of friends as he never met a stranger. We know there are countless stories out there, and as long as we continue to share them, he’ll be with us forever. We’ll miss you Bud. A memorial will be held on February 1st at 2pm at the FOP hall, 1624 S. Agnew Ave, Oklahoma City. In lieu of flowers, we ask that you remember him with a donation to the American Lung Association in his name. To send flowers or a memorial gift to the family of Jerry Eldon Gates please visit our Sympathy Store.
To order memorial trees or send flowers to the family in memory of Jerry Eldon Gates, please visit our flower store.