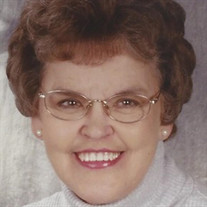 Jeanette Shepherd (Reed), 84, of Tulsa, OK, peacefully passed away shortly after midnight on the morning of June 25, 2020. Jeanette was born on October 30, 1935, to James D. Summer and Chelsea R. Cox, and was the youngest of three children. She graduated from Central High School in Tulsa, as part of the Class of 1954. Jeanette went on to meet and then marry the love of her life, Grover Shepherd, on December 24, 1959. Their whirlwind romance was one which she took great joy in sharing with friends and family throughout the years, still recounting their first dates in vivid detail some sixty years later. Jeanette became a mother on October 14, 1960, when she gave birth to her only child, Vicki Shepherd (Knotts). Nothing in the world gave her more pride and joy. She relished her role as Vicki’s mother, and it showed in her unwavering dedication to her family. Jeanette spent much of her adult life performing data entry duties at Southwest Computer Services, followed by a long stint as a key punch operator at Crane Carrier. However, her heart was always at home with Grover and Vicki. When Vicki eventually married David Knotts, they gave Jeanette more family to share her big heart with--in the form of two wonderful grandchildren, Benjamin and Jennifer. Sadly, Jeanette lost the love of her life, Grover, in 2001. However, she went on to find companionship with Richard Reed, and the two were married from 2006 until Richard’s death in 2016. Jeanette’s family began to grow once again though, on January 29, 2018, when her grandson Benjamin Knotts and his wife, Kathryn, blessed her with the birth of a great-granddaughter, Olivia Charlotte Knotts. Although Jeanette always had a special love for cats, cooking, and countless forms of crafting, to Jeanette, there was never anything more dear to her than her family. In fact, Jeanette found a way to have the best of both worlds all rolled up into one happy little ball when she began traveling with her daughter (and later her grandchildren, as well) to craft fairs and events all over Oklahoma and Arkansas. A trip to Eureka Springs, Arkansas, for just such an event became an annual tradition that Jeanette started with her daughter and family friends, when Vicki was a young teenager. It later grew to include Jeanette’s grandchildren, extended family, and friends—both new and old. Jeannette cherished this yearly outing immeasurably, continuing to enjoy the same treasured October weekend with loved ones for over forty years. Jeanette was never more alive than when surrounded by her family and friends, and nothing seemed to put a sharper gleam in her eye, nor bigger smile on her face, than when she saw happiness in the lives of those she loved. Jeanette was predeceased by her two older sisters, Mary Ellen Russell and Joan West. She is survived by her daughter, Vicki (and her husband, David Knotts); her grandson, Benjamin Knotts (and his wife Kathryn); her granddaughter, Jennifer Knotts (Walke) (and her husband, Devon); her great-granddaughter, Olivia Charlotte Knotts; and two great-grandchildren on the way. Funeral services will be held at Corbett Funeral Home, located at 807 W. Wilshire Blvd., Oklahoma City, OK 73116, on Thursday, July 2nd, at 1:00pm. If you prefer, in lieu of flowers, donations may be made to the Kanoa Rescue Foundation at kanoarescuefoundation.org/donate. To send flowers or a memorial gift to the family of Jeanette Shepherd please visit our Sympathy Store.
To order memorial trees or send flowers to the family in memory of Jeanette Shepherd, please visit our flower store.