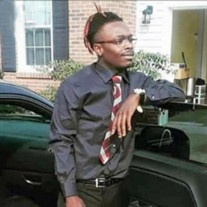 James Odis ‘TJ’ Walker was born on August 11, 1998 to Sharee Nicole Walker and James Odis Wright III in Oklahoma City, Oklahoma. James was the youngest of two sons. At the age of 22 on November 10, 2020 he began his new journey with the lord. James was a loving son, brother, father, cousin, grandson and great nephew to many. James accepted Christ as his Savior at an early age and remained a member of Macedonia Baptist Church. James attended elementary school in Oklahoma City, Oklahoma. Soon after, his mother married Antheny Dé Wayne Walker, a Soldier in the United States Army, and with this union they became a blended family. The family received orders to move to Washington State in 2005 where James completed elementary and middle School. In 2013, the family relocated to Fayetteville, North Carolina where James started high school. At the end of 2016, James moved back to Oklahoma City, Oklahoma where he enrolled in Job Corp in Guthrie, Oklahoma. James obtained his high school diploma and a certificate in Culinary Arts. James really enjoyed cooking and shortly after completing Job Corp, he started working in the food industry. James was a respectful and loving young man who had many hobbies. He enjoyed playing sports, playing video games, cooking, dancing, and music. James gravitated toward music. He used the art of rap as an outlet however, he enjoyed listening to any genre that told his life story. James was like a bright light that lit up a room, as he was always laughing and smiling. James had a unique ability to brighten anyone’s mood in the time of darkness. In “chaotic times,” James was often the voice of reason. It often made you wonder if he had been here in another lifetime. James loved helping others so much and he was so giving that he would at times jeopardize his own way of living just so that others could be happy. James leaves to cherish in his memory those who love him: his parents Antheny and Sharee Walker of Raeford, North Carolina, his maternal grandmother Lenora Walker of Raeford, North Carolina and paternal grandparents Lamont and Veronica Carter of Oklahoma City, Oklahoma. His two children, Naavah Marie Pittman of Fayetteville, North Carolina; James Odis Walker Jr. of Raeford, North Carolina and his mother Ladonna Howard of Oklahoma City, Oklahoma. His brother Kymonethy Walker of Elizabeth City, North Carolina. His stepsisters Carmen, Annéy and Antoiné Walker of Raeford, North Carolina. His fiancé Karen Mendez of Oklahoma City, Oklahoma—two nephews and a niece. James also leaves behind a host of family and friends. Graveside Service - Riverside Cemetery Saturday, November 21st, 2020 12:00 PM to 02:00 PM (CST) To send flowers or a memorial gift to the family of James "T.J." O. Walker please visit our Sympathy Store.
To order memorial trees or send flowers to the family in memory of James "T.J." O. Walker, please visit our flower store.