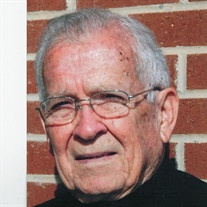 Jim Mahaffey went home to be with his Lord Thursday, Nov. 10, 2016. Friends and family will celebrate his life on Tuesday, Nov. 15, 2016, at 10 a.m. at First Southern Baptist Church, Del City, followed by a Graveside Service at 2 p.m. at Fort Sill National Cemetery. Jim was born Sept. 1, 1921, to Dixie and Merle Mahaffey. He grew up in Devol, OK and was attending Oklahoma University when Pearl Harbor was bombed. He joined the Army Air Corps and was sent to Australia. He received training as a bombardier, navigator and pilot with the 345th. He received the Purple Heart when his plane was shot down during a mission off of Manus Island, New Guinea, and received the President's Unit Citation for his navigation actions over the Admiralty Islands Feb. 19, 1944. After the war, he started a new business, OK Wheel and Brake, in Midwest City, OK. He is survived by his wife, Kathryn; one son, Jim Jr. and wife Loni; and five daughters, Dixie and husband Terry, Carol and husband Gary, Nancy and husband Jake, Laura and husband Barry, and Diana and husband Karen'; 15 grandchildren and 21 great-grandchildren. He was preceded in death by his parents; and his five sisters, Xie Cornelious, Kay Mahaffey, Bonnie Humphreys, Enid Shirley, and Doris Starkey. He was a wonderful Husband, Father, Grandfather and Friend. He outlived all of his WWII buddies and all of his siblings. In war and peace, he was a hero. Visitation Tuesday, November 15th, 2016 - 01:00 PM - Corbett Funeral & Cremation 807 W Wilshire Blvd - Oklahoma City, OK - 73116 Funeral Service Tuesday, November 15th, 2016 - 10:00 AM - First Southern Baptist Church 6400 South Sooner Road - Oklahoma City, OK - 73135 Graveside Service with Military Honors Tuesday, November 15th, 2016 - 02:00 PM - Fort Sill National Cemetery 2648 NE Jake Dunn Road - Elgin, OK - 73538 To send flowers or a memorial gift to the family of James "Jim" Manly Mahaffey please visit our Sympathy Store.
To order memorial trees or send flowers to the family in memory of James "Jim" Manly Mahaffey, please visit our flower store.