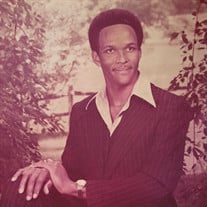 Gossie Lee Pressley was born to Louie and Lillie Mae Pressley on June 7, 1954 in Fulton, Arkansas. Gossie attended Hope High School and graduated May of 1972. Gossie had brief interactions with the Jehovah’s Witnesses as a child, but as a young adult, he decided to formally study in the early 1970’s and dedicated his life as one of Jehovah’s Witnesses on July 5, 1974. Gossie devoted his life to sharing Bible truths and Jehovah’s promise for mankind. Gossie married Cornell Yellowfish on November 3, 1979, in Oklahoma City and they share 3 children together. Gossie started his secular career with Southwestern Bell and later retired from Metro Tech after 20+ years of service. Gossie thoroughly enjoyed entertaining family and friends through singing, fishing, playing cards and dominos. In his free time, he deepened his appreciation of Jehovah’s creation and animals by observing them in their natural habitat, watching nature shows, and plenty of family pets. Gossie fell asleep in death on Sunday, May 22, 2022. He is preceded in death by his parents, Louie and Lillie Mae Pressley, and his sisters, Juanita Roberts and Tocie Pressley. Gossie is survived by his wife, Cornell Pressley, his children, James Yellowfish (Jamie), Analiese Pressley, Marc Pressley (Shawntee); his grandchildren, James Yellowfish Jr., Christian Yellowfish (Monique), Brooklyn Yellowfish, Logan Ormon, Donovan Ormon, Reighan Carey, Lauryn Carey, Ethan Carey, Marc Pressley Jr., Mason Pressley, Madison Pressley, Marlee Pressley, his siblings Myrle Pennington, John Pressley, Betty Brisby, and Charles Edward Pressley and a host of nieces and nephews and friends apart of his worldwide brotherhood. Acknowledgement The Pressley Family would like to thank everyone for the texts, phone calls, and all of the support and kindness during this most difficult time. We appreciate and love you all. To send flowers or a memorial gift to the family of Gossie Lee Pressley please visit our Sympathy Store.
To order memorial trees or send flowers to the family in memory of Gossie Lee Pressley, please visit our flower store.