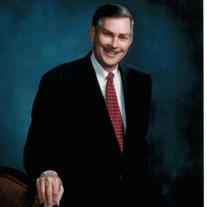 Gerald Frank Barnett January 27, 1943 – August 13, 2019 Oklahoma City Gerald F. Barnett was born January 27th, 1943 in Tulsa, Oklahoma and passed away August 13th, 2019. Jerry was the only child of Frank and Hulda Barnett. He enjoyed spending time with his large, extended family. Jerry was educated in Tulsa, Oklahoma at Will Rogers High, class of 1961. He was the State Champion Cross Country runner in the mile and the half-mile while attending high school. Jerry attended the University of Oklahoma and received his Bachelor of Business Administration in 1965. He was a member of Delta Tau Delta Fraternity and enjoyed participating in “Sooner Scandals.” Jerry was a graduate of the Stonier Graduate School of Banking at Rutgers University in 1973. He also attended the University of Oklahoma Law School. After college, Jerry enlisted in the Army Reserves and served as a 2nd Lieutenant. Jerry began his banking career at The First National Bank of Tulsa, following the career path of his father. He advanced in position and responsibility and created the bank charter for Utica Bank in Tulsa. At that time, he realized he had the ability to create banks and he joined a group to form Midwest National Bank of Midwest City, serving as the youngest bank president in the state. He accepted an offer to sell the bank to Liberty and remained as Regional President. As this bank made plans to sell, Jerry retired. After his brief retirement, he founded U.S. National Bank and became the President and CEO. This bank sold and he retired once again. However, he was encouraged to form another group to purchase the First State Bank in Canute, Oklahoma. Jerry chartered a branch of that bank to Midwest City. First State Bank is currently operating in Oklahoma City. Over the years, he served his community through involvement in a two year presidency of the Midwest City Chamber of Commerce. He is a Paul Harris Fellow in Rotary Club, and he created “Business after Hours” in Midwest City. Jerry was honored to be a part of the Air Force Community at Tinker, working toward bringing the military and civilian communities together. He was a graduate of the Air War College in 1996 and an Honorary Member of the 507th Air Refueling Wing. He was grateful for the opportunity to visit all U.S. Air Force bases. Jerry was an active golfer at Twin Hills Golf Club for 45 years. He also enjoyed his golf membership at Shangri La as a weekend resident of Grand Lake. OU Football season was the highlight of the year for Jerry. Beginning in June, he counted the days until the opening game. Jerry Barnett is survived by his wife, Linda Croft Barnett and children Kristin Hickman, husband Trey, grandchildren Charles and Jack, Michael Barnett, Ken Edwards, and Mackenzie Barnett. A very special thanks to his fraternity brother, Bill Comstock, for his friendship. A celebration of his life will be Thursday August 29th, 2019 at 2:00 PM at Westminster Presbyterian Church, 4400 North Shartel, OKC. Internment will occur at a later date. In lieu of flowers, a memorial will be created at the Chamber of Commerce of Midwest City to recognize Jerry’s contribution in obtaining the Chamber location. Donations may be made to the Chamber of Commerce of Midwest City, memo “Gerald Barnett Memorial” 5905 Prosper Blvd Midwest City, OK 73110. To send flowers or a memorial gift to the family of Gerald Frank Barnett please visit our Sympathy Store.
To order memorial trees or send flowers to the family in memory of Gerald Frank Barnett, please visit our flower store.