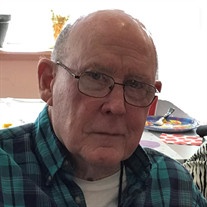 Edwin “Ed” Scheihing was born on February 18, 1937 to Rudy and Mary Scheihing in Guthrie, Oklahoma. He attended high school in Shawnee and Ada where he graduated in 1955. He joined the Air Force Reserves while attending East Central University where he received his Bachelors of Science degree in Business in 1961. He received a Masters Degree in Business Administration 1981 from Central State University. On the day of his graduation from East Central, Ed met Rozine Sales in the campus library. They were married on September 2, 1961. Ed was recalled to service during the Berlin Crisis so the newlyweds moved to Oklahoma City. They lived in Tulsa and again in Oklahoma City before building their home and raising their boys in Edmond. Ed worked as a Claims Adjuster for Ohio Casualty where he retired in 1997 after 30 years. Ed was a member of First United Methodist of Edmond and served as a past Finance Chairman. He served on the City of Edmond Board of Adjustment/Appeals and the Board for Community Development Block Grant. He volunteered his time and talents at the Edmond Historical Society Museum, Taste of Edmond, Edmond Arts Festival, and Park Pals. He enjoyed flying airplanes and spending time on his family land. He was an Eagle Scout and saw both of his sons achieve the Eagle rank as well. He was excited to continue the Scouting tradition with his grandsons and was proud of having three generations of Eagle Scouts. He remained active in the Boy Scouts of America serving the youth as a Unit Commissioner, Assistant Scoutmaster, Committee Chair, and Eagle Board of Review. Ed received special BSA recognition as a Silver Beaver recipient, Vigil Honor, White Buffalo He was a Commissioner at Slippery Falls Scout Ranch for ten years. In his early retirement years he enjoyed traveling, volunteering, tinkering at the “farm,” and being “PopPop” to his 5 grandkids. Ed was full of life and quite a character, doing things his way to the very end! Surrounded by his family, he passed away peacefully on Wednesday, November 15, 2017. The family would like to thank Dr Darby and the caring staff of Autumn Life during his recent stay as well as the staff of Integris Hospice House for the tender loving care they gave our husband, Dad, and PopPop in his final days. Ed was preceded in death by his parents, Rudy and Mary Scheihing (Thompson), his second father, Tommy Thompson, brother, John Scheihing, and sister, Taloah Thorpe. He is survived by his wife of 56 years, Rozine, his sons and daughters, Jeff and Trish Scheihing and Jim and Kari Scheihing, his grandchildren, Dylan, Chrissy, Jake, Cyrus, and Carly Scheihing, and his beloved dog, Coco, all of Edmond, sister in law, Carolyn Scheihing of Stillwater, brother and sister-in-law, Gene and Vivian Thompson, sister-in-law, LaNelda Carson, sister-in-law and brother-in-law, Brenda and Glen Gouge, all of Ada, brother-in-law and sister-in-law, Ronnie and Carolyn Sales of Shawnee, and a host of cousins, nieces, and nephews. A celebration of Ed’s life will be held at First United Methodist Church in Edmond on Monday, November 20, 2017 at 2:00 pm. Scouters, feel free to wear your uniform. In lieu of flowers, memorial donations may be made to the Boy Scouts of America, N.A.M.I. or the charity of your choice. Viewing Sunday, November 19th, 2017 - 02:00 PM to 04:00 PM - Corbett Funeral & Cremation 807 W Wilshire Blvd - Oklahoma City, OK - 73116 Celebration of Ed’s Life Monday, November 20th, 2017 - 02:00 PM - First United Methodist Church 305 E Hurd St - Edmond, OK - 73034 To send flowers or a memorial gift to the family of Edwin Rudolf Scheihing please visit our Sympathy Store.
To order memorial trees or send flowers to the family in memory of Edwin Rudolf Scheihing , please visit our flower store.