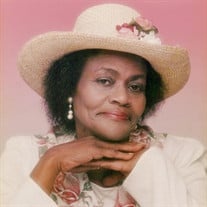 Edna K. Smith was born at the Fort Sill Army Post in Lawton, Oklahoma on October 3, 1941 to Elihu Hunt and Almoina (Pinkie) Stoner. She was raise in Oklahoma City, Oklahoma where she accepted Christ at early age. She met and married Otis Smith and they remained together until his death. Edna went worked at University Hospital as a foodservice supervisor and later retired as a State Employee. She continue working and subsequently retired form Sodexo at OU Medical Center. Edna loved working as a daycare assist in the infant room beside her daughter Felisia until she became ill. Anyone who knew Edna knew of her zest for life and the love of people. She enjoyed playing cards, going to casinos, shopping she loved to cook, dance as well as spending time with her family. Edna truly enjoyed sitting in the lobby of the Charles Atkins Center with Ms. Louise and Ms. Mae. She was also the best pancake and fried cornbread maker of anyone we knew. Edna leaves to cherish her memory her daughters Robinette (Otis) Thomas, Felisia Roberson and sons Theron (Donna) Hunt and Leslie Carl Hunt. Her nieces she loved like daughters are Denise FitzgeraldJ and Joye Eddington. Edna always took the time to be there for them all. I can’t say she had one special grandchild as she had a special love for them each of them. They are: Gregory Keel, Laroya Herring, Kendra Carter, Brook Roberson and Bridget Roberson. Preceding her in death are her parents Elihu Hunt and Alimonia (Pinkie) Stoner, husband Otis Smith, two sisters: Lois Green, Waldean J Franklin, one son Leslie Carl Hunt, five grandchildren, 12 great grandchildren, as well as numerous other family members and friends. She truly enjoyed spending time with each and every one. We would like to thank everyone for the kindness that has been shown to us during our time of loss. With a special thank you to those at the Charles Atkins Opportunity Gardens. Following the funeral service, dinner will be served in the Club Room at the Charles Atkins Center located at 1917 NE 20th Street, Oklahoma City, Oklahoma 73111. To send flowers or a memorial gift to the family of Edna K. Smith please visit our Sympathy Store.
To order memorial trees or send flowers to the family in memory of Edna K. Smith, please visit our flower store.