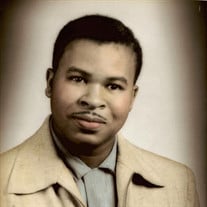 Earl Leon Henderson was born to John and Agnes Henderson on June 16, 1931 in Vernon, Oklahoma. He was a twin and the 12th child of 13. Growing up in Vernon, Earl enjoyed spending time with his family, riding horses and hunting with his brothers. Even though he was the baby boy he was lovingly known as ”Dad‘’ to his siblings. One of Earl’s favorite pastimes was cooking for his family and friends. Also, everyone knows he really enjoyed shopping and looking “SHARP”. Earl worked as a cook for many years, however he retired from Oklahoma Gas and Electric Company. He began his journey with Jehovah Witnesses in 1968, and he remained a faithful servant for over 50 years. We believe Earl touched many lives and he made a positive impact on his family and friends . Earl was preceded in death by his parents John and Agnes Henderson, six brothers and five sisters. He leaves to cherish his memory his sister Maxine Henderson of Des Moines, niece Florice Henderson of Oklahoma City, nephew Terry Walker of Oklahoma City, great niece Karla Abernathy (Stanley) of Oklahoma City, and a host of nieces, nephews and friends. To send flowers or a memorial gift to the family of Earl Leon Henderson please visit our Sympathy Store.
To order memorial trees or send flowers to the family in memory of Earl Leon Henderson, please visit our flower store.