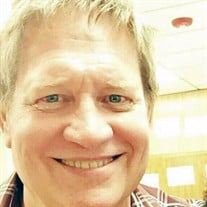 Doug Alan Abney, known by his family and friends as Doug, was born on Aug. 21, 1956 in Jacksonville, FL.  After moving to Oklahoma, Doug grew up in Blair, Oklahoma alongside brother Jeff and sister Donna. His mother Aggie was a stay-at-home mom and his dad Richard was in law enforcement.  Doug and his best friend Greg Cole found mischief at every turn and didn’t always get caught.  Doug graduated from Blair High School in 1975 and followed Greg into the U. S. Army.  Doug was honorably discharged and returned to Blair to consider his next step.  Doug eventually moved to the Oklahoma City area where he worked as a Sprint Customer Service Manager, often traveling to other locations to train other employees.  Doug was passionate about many things, including computers.  He got his first computer just as the internet was starting up and was convinced that it was the wave of the future.  He was right. After Doug left Sprint, he took several college level psychology courses and also worked for the Salvation Army.  In 2015, Doug found Lori, the love of his life, through an online dating platform.  They dated for two years, enjoying intimate dinners, going to movies and feeding Doug’s love of music by attending a Beatles tribute concert at the Oklahoma State Fair.  Doug also became a volunteer at Lori’s elementary school.  Their marriage in 2017 was in a beautiful outdoor ceremony at Lori’s parent’s home in Choctaw. Doug & Lori’s marriage was filled with much laughter, partnership, pet parenting, long conversations and a love that grew deeper every day.   Doug is survived by his wife Lori, Sister Donna, his nephew Ricky, children Trevor, Aaron, Toni and Bailey, grandson Cooper, as well as his aunt and uncle Gail and Jon. Doug will be missed by all who loved him. To send flowers or a memorial gift to the family of Doug Alan Abney please visit our Sympathy Store.
To order memorial trees or send flowers to the family in memory of Doug Alan Abney, please visit our flower store.