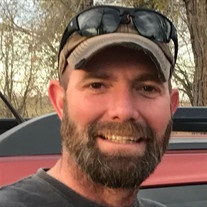 Derek Chance Jacks passed away in his home after a long illness on November 20th, 2020 at the age of 44 years and 10 months. Derek was born on January 20th, 1976 in Harlingen, TX to Steven and Nannette Jacks (Fanning). Derek got his love for fishing while the family lived in Corpus Christi Texas before moving back to Oklahoma. His love for camping and fishing stayed with him throughout his life. Derek graduated from Sayre High School at Sayre OK in 1994. Following graduation, Derek joined the United States Air Force in August of 1994 where he trained for and became a crew chief for the KC 135 refueling aircraft and was stationed at various bases in Europe, Middle East and Asia. The time spent flying fueled his love of flight and planes, so following his discharge in March of 1999, he enrolled in OU flight training program and received he pilots license in July 2001. Derek is survived by his 6 year old son Walker and Walker’s mother Stephanie of Midwest City, OK. His brothers; Steven and wife Amie of Edmond, OK, Coy and wife Jennifer of Canute, OK, and Zachary of Enid, OK. His parents; Nannette Fanning of Oklahoma City, and Steven and Lela Jacks of Arnett, OK and many Uncles, Aunts, Nieces, Nephews and his Grandmother Shirley Armour of Ft. Worth, TX. Derek was preceded in death by his maternal grandparents Wayne and Ethel Fanning and paternal grandparents Clyde and Pauline Jacks. Derek touched everyone’s heart he met and was always quick with a joke or a wrench to help. He would go out of his way to help a friend in need and he dearly loved his son Walker. He just wanted people to be kind to one another. Derek said ‘Kindness does not cost anything and lasts a lifetime’. Derek was and still is loved by all who knew him. “Those we love can never be More than a thought away For as long as there is a memory They live in our hearts to stay” Viewing Friday, November 27th, 2020 10:00 AM to 11:00 AM Corbett Funeral & Cremation Our Chapel’s capacity at this time is 50. PLEASE NOTE: You MUST wear a mask at ALL TIMES while in our facility. This is not open to debate. If you do not comply you will not be allowed to stay. - Thank you for your understanding. To send flowers or a memorial gift to the family of Derek Chance Jacks please visit our Sympathy Store.
To order memorial trees or send flowers to the family in memory of Derek Chance Jacks, please visit our flower store.