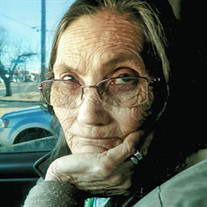 Dottie Gray "Ma" was born on November 28, 1947 to Chester and Lila (Mullins) Campbell in Memphis, Texas. Dottie married Ronnie Gray in Duncan, Oklahoma on June 7, 1966 and lived in Oklahoma for the majority of her life. Her heart and soul was her family. She raised her six children and continued to raise her grandchildren whom she loved very much. hHer goal in life was to see Joanna graduate high school and be happy. She was very spoiled by love and wanted nothing more in life but to see her family healthy and happy. Her hobbies were going to the lake, camping, fishing and cooking. Her grandchildren loved her hash browns, eggs and brown gravy that..was their favorite. But her passion, no, her job was Bingo. Nothing brought her more joy, other than her family, than sitting at the bingo hall working hard at hollering bingo and drinking coffee. She also enjoyed going to Golden Corral, one of her favorite places to eat. Many night's were spent playing Wahoo with her kids and grandchildren. Ma was preceded in death by her mother, her father, her brothers and sisters, her son Ronnie Gray Junior, her daughter Baby Girl Jessica Brackett, her grandson Christopher Tyson and ex-husband Ronnie. Dottie is survived by her daughters Cynthia and husband Tommy, Delilah and husband Doug, Jackie and husband Rodney, son David Gray, son Jesse Gray and wife Linda and 17 grandchildren: Larry Matthews Jr., Jennifer Smyth, Kevin Matthews, Jonathan Tyson, Tommy Tyson II, Annie Williamson, Clayton Behnke, Kayla Sketo, Michael Wallace, Ronnie Gray, Matthew Gray, Katrina Gray, Jesse Gray Jr, Christina Gray, David James Gray, Johnny Brackett and Joanna Gray; 28 great-grandchildren and many more friends that she took in as family. She was the Rock and Foundation of the family and will be loved and missed by all who knew her. To send flowers or a memorial gift to the family of De Dottie "Ma" Gray please visit our Sympathy Store.
To order memorial trees or send flowers to the family in memory of De Dottie "Ma" Gray , please visit our flower store.