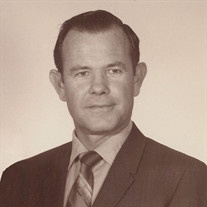 Dale W. Pylant April 18, 1927- March 4, 2017 Dale W. Pylant graduated from Duncan High School. Dale then served in the United States Navy during World War II. After serving in the Navy Dale attended the University of Oklahoma. He worked at Skelly Gas Station and Retail Business. Dale was retired from the Bureau of Land Management. He is preceded in death by his parents Herman and Willie Odell Pylant (Sanders). He is also preceded in death by his siblings Katheran Sleeker and Jimmie Pylant, his daughter Diane File and wife June. Dale is survived by his sister Billie Joy Wheeler, his daughters, Susan Johnson with her husband Darrell, and Karen Weems with her husband Mike Gillem, his son Danny P. Duff and wife Uschi, Dale's eight grandchildren, seven great grandchildren, one great grandchild Parker Dale due in July, his sister in-law Suellin Martinez, and many nieces and nephews. Dale took pride in his yard especially his flowers. Dale loved hunting pheasant and quail fishing and everything that was outdoors and in nature. The service for Dale W. Pylant will be held at 10:30 AM on Thursday, March 16, 2017 at Trinity Lutheran Church. Address: 5701 S May Ave, Oklahoma City, OK 73119. The internment will follow the service on Thursday, March 16, 2017 at 2:30 PM at Sunset Memorial Gardens. Address: 8700 NW Cache Rd, Lawton, OK 73505. To send flowers or a memorial gift to the family of Dale Wayne Pylant please visit our Sympathy Store.
To order memorial trees or send flowers to the family in memory of Dale Wayne Pylant, please visit our flower store.