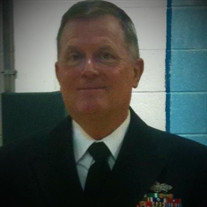 Crowell Eddy Crozier, beloved husband, father, and poppa Chief, passed away Saturday, March 24th, 2018, at his home surrounded by his family. Crowell, or C.E. as he was known to his friends, was born July 6th, 1954, in Ada, Oklahoma to Robert L. (Bob) and Alice Marie Crozier. The family soon moved to Lake Charles, Louisiana where C.E. grew up. During his senior year of high school, he moved to Oklahoma City where he met his wife, Laurie Jeanne Daw. Together they moved to Edmond and raised their three children. Family was extremely important to C.E., and his children agree that his love and support were always felt, even when lovingly referred to as his “knuckleheads”. He was always available to “rescue” his kids whenever they called with a problem. He spent many evenings and weekends cheering for his kids and then grandkids at school plays, music concerts, dance recitals, and whatever sport they were currently playing. He enjoyed gathering with his family to celebrate events, big and small. Even though he moved to Oklahoma as a young man, his heart belonged in Louisiana or “God’s Country” as he referred to it. He enjoyed cheering on the LSU Tigers, shrimp boils, and hot muggy days. His family will miss his wit, the blues music playing from his garage, the advice he offered freely, his cooking, his love of history, the big hugs he gave, his strength and eternal optimism. C.E.’s love for his country was demonstrated by serving in the Naval Reserves for twenty-six years. During this time, C.E. served two combat deployments to Iraq in support of Operation Iraqi Freedom and much time in South Korea to support Commander Naval Forces Korea. He was qualified as a Seabee Combat Warfare Specialist, Fleet Marine Force Warfare Specialist, and retired as a Senior Chief Petty Officer. In addition to his career with the Naval Reserves, C.E. worked in the Right of Way industry where he helped complete transportation projects in Oklahoma, Texas, Kentucky and Utah. C.E. is survived by his wife, Laurie; children, Christine Elaina Davis, Michelle Marie Crozier, Daniel Crowell Crozier; and daughter-in-law Carol Crozier; his grandchildren, Jackson and Alaina Davis; and numerous cousins, nieces and nephews. He is preceded in death by his parents; his brother, Linton Crozier; and his uncle whom he was named after, Crowell Carrier Eddy. Friends are welcome to celebrate his life Saturday, April 7th, 2018 at 10AM at First Presbyterian Church of Edmond. 1001 S. Rankin St., Edmond, OK 73034. A private burial at Fort Gibson National Cemetery in Muskogee, OK will follow at a later date. In lieu of flowers C.E. would encourage everyone to thank a veteran, respect the flag and love your family. To send flowers or a memorial gift to the family of Crowell Eddy Crozier please visit our Sympathy Store.
To order memorial trees or send flowers to the family in memory of Crowell Eddy Crozier, please visit our flower store.