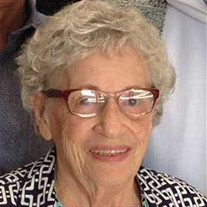 CONGETTA MARY DEANGELO December 17, 1928 – December 11, 2017 Congetta “Connie” M. DeAngelo, 88, passed away peacefully on Monday, December 11, 2017. Connie was born on December 17, 1928 and raised in Utica, New York. She married James R. DeAngelo (also of Utica) in June 1948. They were married for 69 ½ years and had four boys, James Jr, Ronald, Donald (twins), and David. Connie and her family moved from Utica to Oklahoma City in 1966. Although Connie came from humble beginnings, she gave her family the strength and courage to seize all possibilities. Connie enjoyed cooking, baking, and painting but her passion was to crochet. Besides taking care of her family, she was a big sports fan and loved watching football with her boys. Connie worked and/or managed the art, crafts and photography venue at the Oklahoma State Fair for ten plus years. In addition, during tax season, she was a tax preparer for 20 plus years. Connie was a devoted member of the St. Patrick Catholic Church. She was dedicated to the St. Patrick’s Women’s Group where she volunteered her services for the bake and garage sales along with many other church events. This loving wife, devoted mother, and doting grandmother, great-grandmother, and great, great-grandmother was preceded in death by her father and mother, Philip and Isabel Chiffy; brother, Alexander Chiffy; and daughter-in-law, Carol DeAngelo. She is survived by her husband James DeAngelo Sr. of Oklahoma City; sons, James Jr and his wife Elaine of Cabot, Arkansas; Ronald and his wife Laurie of Manassas, Virginia; Donald and his wife Lisa of Richardson, Texas; and David DeAngelo of Oklahoma City; 4 grandchildren, 9 great-grandchildren, 1 great, great-granddaughter, and a host of loving nieces, nephews, and friends. She also leaves behind her younger brother Frank Chiffy and his wife Mary Lourdes of Utica, New York and two special sister-in-laws, Joanie DeAngelo, and Rosemarie Chiffy, both of Utica. The family wishes to sincerely thank the entire staff of Alliance Health Deaconess Hospital for the wonderful and compassionate care they afforded to Connie and her family. In lieu of flowers, remembrance in her name may be made to Catholic charities or a charity of your choice. Funeral Mass Saturday, December 16th, 2017 - 10:00 AM - St. Patrick's Catholic Church 2121 N Portland Ave - Oklahoma City, OK - 73107 To send flowers or a memorial gift to the family of Congetta Mary DeAngelo please visit our Sympathy Store.
To order memorial trees or send flowers to the family in memory of Congetta Mary DeAngelo, please visit our flower store.