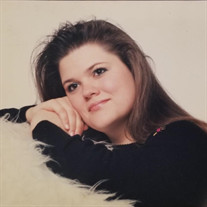 Christian Kay Reeves left this world to be with Yeshua on August 31, 2021. Christian was born on September 27, 1973 in Bethany, OK. As a child she grew up in the church and won many awards in Biblical studies. She converted to Messianic Judaism in 2000. Christian was very intelligent, she loved problem solving. She was named a Who’s Who’s among students in both high school and college. She graduated from Putnam City West in 1991 and was a part of the National Honor’s Society. She carried her studies on to OSU and OU where  she earned degrees in  Engineering, Drafting, and in Computer Programming.  She worked for several businesses as an architectural engineer and drafter. She designed roads, bridges as well as new residential and commercial buildings for stores such as Tommy Hilfiger. She designed the spinning Dolese truck landmark on I-40 in Oklahoma City. Her proudest achievement was giving birth to her cherished daughter Ashlee. She went on to marry her beloved Mitchell ‘Mitch’ Reeves on July 7, 2001. They grew up knowing one another, and built a long lasting friendship that made a solid foundation for their 20 years of matrimony. They were both very active in the Messianic Jewish congregation called Rosh Pinah as well as Bet Ami. She really enjoyed reading her Bible. Her laugh was contagious. She enjoyed spending time with her family and friends and always treated everyone like an old friend. Christian was always a confidante and her nurturing spirit reached all who knew her. She loved music, and everyone can put a song to a memory about  her. She enjoyed going to concerts and on  road trips with family and friends. She enjoyed long drives around the lake to melt away the days stress while Daisy rodes beside her, Her Chihuahua, Daisy, was a great companion to her. She is preceded in death by her parents Larry and Terri Campbell. She is survived by her husband Mitch Reeves; daughter Ashlee Campbell and husband Horacio Juarez; maternal grandmother Anne Barlow; sister Jenny O’Malley, nephew Gavin Wood, niece Sage Wood and nephew Griffin Stanley; sister Michelle Sanders and husband, Robert Sanders and niece, Ivy Campbell; brother Will Campbell, and nephews Ethan and Conner Campbell. She also has many other extended family and close friends who she held dear to her heart. To send flowers or a memorial gift to the family of Christian Kay Reeves please visit our Sympathy Store.
To order memorial trees or send flowers to the family in memory of Christian Kay Reeves, please visit our flower store.