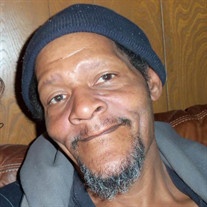 Charles Montifell Mayes III, was born in Oklahoma City, OK, to Charles and Evelyn Mayes on June 2,1959. He was the fourth of six children born to their union and the 1st boy. Charles was given the distinction of being called “MAN.” Needless to say, he was a typical boy, into everything and a shock to our family after three girls. However, Charles is remembered as a loving brother throughout his life. Growing up Charles attended Corpus Christi Catholic Church and School. Later on, he attended Creston Hills Elementary. After several years our mother relocated to Norman Oklahoma with the four minor kids. Charles started in the Norman school system where he excelled in Baseball. He also played instruments and sang in the choir. While in choir Man participated in local and state competitions winning several medals. He also loved swimming and fishing. Man would take the younger kids fishing at the pond in the field behind the house. As a teenager Man owned a motorcycle. He loved driving our brother and himself to work at the local Sonic. He was always working and helping our mother and the kids. He attended Norman High where he completed the 12th grade in 1977. After high school Charles chose to enter the Army. In August of 1978 he enlisted and was honorably discharged in 1979. After the Army Man worked construction for a while. It was during this time he lost his way as a result of mental health issues. He struggled several years in this recovery process. During one of Man’s more lucid times in his journey to recovery he made a deeper commitment to Jesus. He attended Victory Bible College for a period of time where he was introduced to a deeper understanding forgiveness and of a loving relationship with his Heavenly Father. No matter what life style Charles was living he was always taking care of others. He had such a kind, loving and generous spirit/heart. A few years later the miracle happened. Charles’ life was turned completely around when he made the decision to move into the Jeltz Center in 2012. He seemed to thrive. God’s gifts to Charles become more evident as he gave to others. Man, always seemed to be happy, laughing and joking; enjoying others company. Man, often would give away the very clothes off his back to help people. Even in his last days when Man didn’t feel well, he thought of others. He isolated himself so he wouldn’t cause others to be sick. Charles/Man never married or had children that we know of; he didn’t go to college; never brought a house or had material possessions. BUT HE WAS RICH. By the worlds standards he may not have achieved much, but his life touched so many people with the LOVE of JESUS. Charles leaves behind to continue God’s divine plan, his Family, Siblings: Cassandra D. Burks, Karen Y. Spencer, Emma L. Mayes, Evelyn Alphin (Michael), Anthony S. Mayes; Nieces and Nephews; Autumn R. Burks, Michael L. Spencer Jr., Tamilia M. Mayes, Ebony N. Hardwick, Anthony S. Mayes Jr. and Krystal M. Armstead (Kevin); A host grand nieces and nephews, other relatives, the extended Jeltz family and friends. To send flowers or a memorial gift to the family of Charles Montifell Mayes III please visit our Sympathy Store.
To order memorial trees or send flowers to the family in memory of Charles Montifell Mayes III, please visit our flower store.