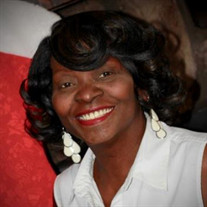 Viewing Friday, February 1st, 2019 - 05:00 PM to 07:00 PM - Corbett Funeral & Cremation - Oklahoma City 807 W Wilshire Blvd - Oklahoma City, OK - 73116 Funeral Service Saturday, February 2nd, 2019 - 11:00 AM - Wildwood Christian Church - Oklahoma City 6900 N. Kelly - Oklahoma City, OK - 73111 Brenda Joyce Mayes was born on March 17, 1961 in Dallas, Texas to JC and Alfreda Zackery Jr. She attended schools in South Oak Cliff in Dallas, Texas and grew up in the Church of Christ. In Brenda’s younger years, she married Howard Mayes and to this union three daughters were born. Although they’re marriage dissolved, they went on to co-parent and raise their daughters. Brenda was an amazing mother, loving sister, outstanding grandmother, and loyal & dedicated friend. She never met a stranger and was always helping others. She walked everywhere in her high heels, with her head held high; because she always stated there was nothing down below for her. You could catch her at any given day yelling BINGO and winning all the money. Yes even when the children played, she took their money with a smile. She didn’t stop there; she could slam some bones (dominoes for those who don’t know what bones are) and talked plenty of noise. She was a natural born caregiver to all, including individuals with disabilities and the elderly. Her passion was cooking, and you could always find her in the kitchen, hers or yours cooking with love. When she cooked, everyone was welcomed. Her final years were spent with Donald Brawner who proposed to her on Saturday, December 15, 2018. His family became her family and both families became one. Brenda began and ended each day the same, with a smile on her face. Even in her final days, she was smiling. Brenda was preceded in death by her parents, JC & Alfreda Zackery Jr.; sisters, Barbara, Jaunita, Wanda & Beverly Zackery; brother, Willie Steele Sr.; and nephew, Rickey Jackson Jr. Brenda leaves to cherish her memories, her loving fiancé Donald Brawner; her siblings, Baby Sister Annette Sample (Oscar), Helen Jackson (Rickey Sr.), Almeter Lee, & Kenneth Zackery; God sisters, Vivian Dixon (Ben Sr.), Yolanda Jackson (Reco), ShaRonne’ Barclay; step-siblings, Reshial Ellis, Edward Barclay, Stephon Peoples, & Stacy Jordan; her daughters, Toinette Younger (Carlos), T’Letha Mayes (Jessie), and Ta’Meika Mayes and their father Howard Mayes; her grandchildren, Dunya, Knia, Daion, Lyric, Yaniya, Brendin, Brooklin, & Kira; and host of family and friends. Special Thanks to Charmane Davis (sister & best friend) of Brenda Mayes. You seen the need, and you not only stepped up, you stepped in and helped our mom when she needed it the most. We could not have asked for a better plan to be put in place to help us take care of our mom. Thank you from the bottom of our hearts, Shakey, Letha & Mimi. To send flowers or a memorial gift to the family of Brenda Joyce Mayes please visit our Sympathy Store.
To order memorial trees or send flowers to the family in memory of Brenda Joyce Mayes, please visit our flower store.