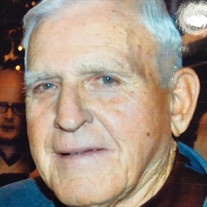 Billy Leroy Trabue, 90, of Newalla, Oklahoma, passed away June 8, 2017 with his family by his side at the VA Medical Center in Oklahoma City. He is survived by his wife of 64 years, Dixie Trabue, his children, Denise Rodgers of Bastrop, TX, Billy Trabue, Jr. of Muskogee, OK and Tina Turner, of Newalla, OK. He is also survived by four grandchildren, Dior Goodwin of Austin, TX, Tara Trabue of Ft. Worth, TX, James Turner, of Chouteau, OK, and Jessica Turner of Broken Arrow, OK. He was blessed to have two great grandchildren, Kamden and Addilyn Turner. Enlisted in the US Marine Corps in 1943 at the age of 16, Bill was wounded in the first wave at Iwo Jima. After spending time in military hospitals and ships in Saipan, Tinian, Guam, and Hawaii, Bill rejoined his company and was on his way to attack Japan when the war was declared over. Bill briefly served in the occupation forces on the island of Kyushu. He was discharged and sent home in 1946 at the age of 18. In addition to the Purple Heart, Bill was an Expert Rifleman and received other medals of distinction. In 1950, after winning seventeen fights, Bill earned the title of Golden Gloves Heavyweight Champion of Arizona following a knockout punch to his opponent who was forty pounds heavier. Following his boxing career, Bill entered the rodeo arena where he rode bulls, bareback broncs and steer wrestled. Bill was an active member of the Professional Rodeo Cowboys Association, competing throughout the United States. While competing at a rodeo in Williams, Arizona he met his soon-to-be bride, Dixie Purviance. Bill and Dixie married and lived in Arizona and Kansas before settling in the Oklahoma City area where they raised their three children. For the past 45 years, Bill bred, raised, and professionally trained bird dogs and held numerous national honors, including Oklahoma Sportsman of the Year, and Oklahoma Dog of the Year, for many different dogs over the course of his long and productive career in field trialing. An expert horseman, Bill was also very accomplished and well-known for raising and training gaited horses. Memorial Service Friday, June 30th, 2017 - 09:00 AM - New Life Baptist Church 8900 S Peebly Rd - Newalla, OK - 74857 Burial to Follow Ft. Sill National Cemetery, 2648 NE Jake Dunn Road, Elgin, OK, 73538 To send flowers or a memorial gift to the family of Billy Leroy Trabue please visit our Sympathy Store.
To order memorial trees or send flowers to the family in memory of Billy Leroy Trabue, please visit our flower store.