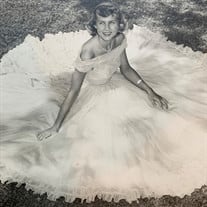 Beth Ann Sadler June 6, 1929 - September 7, 2019 Oklahoma City Born in Chickasha, OK, to Wm V. & Dolly Pound on 6/6/29, and relocating shortly thereafter to Ardmore, OK, where she attended public school, established many life-long friends, and picked up the nickname of "Mike," which she was affectionately called by family and friends for the rest of her life. She graduated from Ardmore HS in 1947 and then attended Gulf Park College in Gulfport, MS, for 2 years. Thereafter, she attended OU and was a member of Kappa Alpha Theta sorority which she remained active in throughout her life. She graduated with a BA from OU in 1951. While at OU, she met the love of her life, A. D. "Dee" Sadler, Jr., and they were married in Ardmore, OK, on Feb. 23, 1951. Dee enlisted in the US Air Force during the Korean War and they were stationed in Roswell, NM. While in Roswell, Dee & Mike gave birth to their first child, Stan, in 1952. Later that year, they relocated to Ardmore, OK, and were blessed with 3 more children, Greg, Michael (“Hall”), and Shannon. In 1961 the family moved to Oklahoma City and Beth Ann started a 30+ year career as a speech therapist in the OKC Public Schools. She enjoyed cooking/entertaining, travel, books, get togethers with family and friends, and charitable events. She loved decorating the house, especially for various holidays/events and Christmas was her favorite. She and Dee would spend days meticulously setting up Christmas trees, table decorations, lighting, etc., both inside and out, readying the house for the big event with family and friends. She was predeceased by her parents and her husband, Dee. She is survived by her son, Stan Sadler and his wife Tracy, of Edmond, OK; son, Greg Sadler and his wife, Sandra, of San Juan Capistrano, CA; son, Michael Sadler and his wife, Susie, of OKC; daughter, Shannon Crites and her husband, Keith, of Ardmore, OK; 12 grandchildren - Kristianne Sadler, Brooke Lochmann and husband, Austin; Whitney Brown and husband Brian; Josh Sadler and wife, Blake; Cody Crites and wife Brittany; Matt Sadler and wife, Laci; Charlee Sadler; Noel Williams; Calvin Williams; Stefano Pecci; Sean Sadler; and Ryan Sadler; 15 great grandchildren and 2 great-great grandchildren. Sincerest thanks from the Sadler family to the many, many friends and families who provided so much love and support during her final years. The family would also like to extend its appreciation to Mercy Hospice and a special thank you to Ms. Tamisha Hill. A memorial service will be held at 1:00 pm on Monday, Sept. 16, 2019, at All Souls Episcopal Church in OKC. In lieu of flowers, the family requests that memorial donations be made to All Souls Episcopal Church, 6400 N. Pennsylvania Ave., OKC 73116, or the Alzheimer's Association. To send flowers or a memorial gift to the family of Beth Ann Sadler (Pound) please visit our Sympathy Store.
To order memorial trees or send flowers to the family in memory of Beth Ann Sadler (Pound), please visit our flower store.