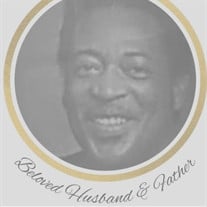 Arthur Wilburn Bookman was born January 4, 1944, the oldest son of Lemmie and Ruth (Clerkley) Bookman. He graduated from Dunjee High School in Spencer, OK In his late teens he began investing a lot of shoe leather (walking about 20 miles one way) to see a young lady named Joann. When Arthur was 20 and Joann was 19 he had $20 in his pocket and she convinced him to get married. Not having a car, he walked to OKC to Del City to work until his employer (not wanting to lose a good worker) helped him purchase a car. He was eventually trained in Houston and became the head chef for both the Der Dutchman and Zuider Zee restaurants. He retired 31 years of employment as a chef. In the early 2000's he started attending church at Jernigan Memorial Nazarene with Joann. Arthur was preceded in death by his parents, two siblings and his son Arthur Ray. He is survived by his wife Joann, daughter Joanell, and brother Alvin Curtis Graham. To send flowers or a memorial gift to the family of Arthur Wilburn Bookman please visit our Sympathy Store.
To order memorial trees or send flowers to the family in memory of Arthur Wilburn Bookman, please visit our flower store.