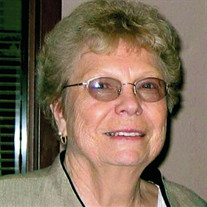 ALTA MAXINE GORDON 9/22/1935 – 12/23/2018 Alta Maxine was born on September 22, 1935 in a small house in Perryton, TX. She was the eldest of three children born to Abe Herman and Ellen Kalista Janzen (Sheppard). Maxine was a protective older sister to Patricia May and Herman Alonzo, and she treasured her relationships with them until her passing. She grew up in Liberal, KS, graduating from Liberal High School in 1952. Shortly after graduating high school, Maxine’s best friend, Sandy Gordon, introduced her to her handsome soldier brother, Mervin LaRoe Gordon. Maxine played hard-to-get, but Mervin was up to the challenge. Mervin finally captured Maxine’s heart, and they were married two years later on April 30, 1955, in Liberal, KS. They did not immediately tell their families as Mervin’s dad was the local bootlegger and Maxine’s family was one of his valued customers. Shortly after marrying, Merv and Maxine moved to Perryton, TX. Maxine accepted Christ as her savior as a teen, but it was in Perryton that Maxine recommitted her life and introduced Merv to Christ. They became members of the Assembly of God Church in 1957 and both remain faithful servants to Christ’s calling on their lives. Their marriage was blessed with four sons: Dennis Lee (January 1, 1956); Gary Douglas (April 10, 1957); Glen Dale (November 24, 1958); and Greg Lance (December 24, 1963). Her sons were her pride and joy, and she treasured her 14 grandkids and 13 great-grandkids. Maxine attended Liberal Beauty College where she obtained her cosmetology license. She worked as a cosmetologist for many years in Perryton before becoming a retail buyer for Gibson’s Discount Store and later a sales clerk for C.R. Anthony Department Stores. Merv and Maxine moved to Cedaredge, Colorado in 1990 where Maxine returned to Gibson’s as the supervisor over inventory. She loved having her grandkids come stay the summers with them in Colorado where they made so many lasting memories together. Maxine retired in 2000 when she and Merv moved to Calera, Oklahoma. They moved to Kingfisher, Oklahoma in 2007 and then to Yukon, Oklahoma in 2013. Maxine was a talented artist and musician. She had the voice of an angel and was a master at playing the guitar and violin. Maxine had been a faithful member of Faith Tabernacle Church since July 2007. Maxine was surrounded by her family as she peacefully slipped from this life, and was ushered through the gates of Heaven at 5:52 pm on December 23, 2018, in Oklahoma City, OK. The legacy she left and the devotion she and Merv had for over 63 years was evident as Merv lovingly caressed Maxine’s face and sang hymns to her as they soaked in their final moments together. We should all be so blessed to have a love like they still share. Maxine is survived by her beloved husband Merv; Sons Glen and wife Sandy of Yukon, OK and Greg and wife Kris of Oklahoma City, OK; Sister Pat Young of Mead, OK; Brother H.A. Janzen and wife Sue of Wichita, KS; Sisters-In-Law Marjorie Spady of Dill City, OK, Loretta Krieger of Hooker, OK and Sandy Nielson (Chuck) of Hotchkiss, CO; Grandchildren Kimberly Gordon, Shanna Gordon, Jonna Dinkel (Steve), Alesha Gordon, Kenneth Gordon (Susana), Jeremy Gordon (Stacy), Malcolm Gordon, Scott Eudey (Misa) and Tim Eudey; 13 great-grandchildren with one on the way; and numerous nieces and nephews. She was preceded in death by her parents; sons Dennis Lee (January 1, 1956) and Gary Douglas (January 29, 2003); daughter-in-law Paula Gordon (February 28, 2014); and granddaughter Trystan Nikkole Gordon (September 1, 1989) Funeral Services will take place at 10:00 am on January 5, 2019, at Faith Tabernacle, 800 S. Portland, Oklahoma City, OK 73108. Internment will take place at 11:00 am on January 7, 2019, at Ft. Sill National Cemetery, 2648 NE Jake Dunn Rd, Elgin, OK 73538. In lieu of flowers, the family has requested that donations be made in Maxine’s memory to the Faith Tabernacle Building Fund. To send flowers or a memorial gift to the family of Alta Maxine Gordon please visit our Sympathy Store.
To order memorial trees or send flowers to the family in memory of Alta Maxine Gordon, please visit our flower store.