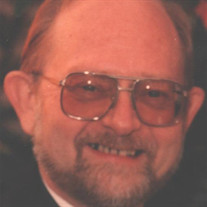 William Hans Schneider passed peacefully surrounded by family on September 19,2018 in Oklahoma City, Oklahoma. He was born August 22, 1944 in Billings, Montana to Adolph William Schneider and Kirsti Kyllikki Schneider. They moved to Duluth, Minnesota when William was a young child. His father died when he was 10 years old, and shortly after, the family moved to Oklahoma City when his mother remarried. He attended Bishop McGuinness High School and graduated in 1962. He married Patricia Morris in 1963. He entered the Navy in March 1967, where he served as MR3 Machinist on the USS Topeka, until his honorable discharge in December 1968. While in the service he received National Defense Service Medal and had outstanding performance evaluations for his machinery repairman skills. After discharge he worked at Western Electric, and then at Dura-Stilt as a tool and die maker for the remainder of his career. He retired from Dura-Stilt in 2011. He is preceded in death by his parents, stepfather H.C. Barrick, step siblings H.C. “Bud” Barrick and Pamela Roney, and his beloved pets Nickademus, Blondie, and Sidney. He is survived by his children Jill Ann Lyman, and husband Silas, Deborah Denice LaBrie and husband Bruce, Scott Schneider, and the mother of his children, Patricia Schneider. He has four grandchildren, Hayden Lyman, Madison Lyman, Chloe LaBrie, and Seth Schneider. He is also survived by his brothers James Schneider, Michael Schneider and wife Martha, sister Sandra Seibel, step-siblings Linda Siebold and husband Don, and Susan “Gail” Baucom and husband Neil, along with numerous nieces, nephews, and their children. His hobbies in life included his love of vintage tractors, automobiles (especially Chevrolet), fishing with brothers, horseshoes, and tinkering with anything mechanical. He loved to be outside with family, friends, or neighbors enjoying a cold beer, or inside watching his favorite TV shows. He will be greatly missed.

The family of William Hans Schneider created this Life Tributes page to make it easy to share your memories.

Send flowers to the Schneider family.