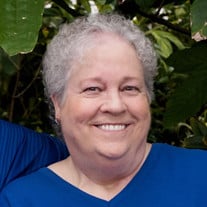 Vicki L. Decker, 70, passed away March 24th, 2020 at her home in Oklahoma City, Oklahoma. She was born on July 12th, 1949 in Borger, Texas the daughter of George and Evelyn Smith. Vicki graduated from Carl Albert High School in 1967 and went on to Southwestern Oklahoma State University for 2 years. She received her Associates Degree from Seward County Community College, her Bachelors in Business Education from Oklahoma Panhandle State University, and received her Masters Degree in Special Education from Fort Hays State University in 1995. Vicki worked for High Plains Educational Cooperative out of Dodge City and was assigned to Kismet, Hugoton, and Satanta in Special Education until she retired in 2011. She married Billy Decker in 1969 and they had their daughter, Carol Lynn Decker in 1970. She enjoyed collecting bunnies, reading, going to the OKC Thunder games, and traveling the world with her husband. She also loved to spend time with friends and family, and especially the time she could spend with her granddaughters and great-grandchildren, Laiklyn and Silas. She will be deeply missed by her friends, family, and those who were blessed to know her. She was a member of the Sublette Southern Baptist Church from 1986 to 2012 when she moved to Oklahoma City and was welcomed by the Quail Springs Baptist Church until her death. Preceding her in death were her parents, George and Evelyn Smith and her daughter, Carol (Decker) Alvarado. Vicki is survived by her husband Billy of Oklahoma City, and their two granddaughters, Jessika Alvarado of Fort Smith, Arkansas; and Brittany and her husband Mikal Behm of Hector, Arkansas; and her two great-grandchildren, Laiklyn and Silas Behm. Due to the unfortunate state of emergency currently in place due to Covid-19, the family will only have a private graveside service at this time. A public memorial service will be scheduled in the near future. Memorials are suggested to the family in care of the funeral home. Thoughts and memories may be shared online at www.corbettfuneral.com

Vicki L. Decker, 70, passed away March 24th, 2020 at her home in Oklahoma City, Oklahoma. She was born on July 12th, 1949 in Borger, Texas the daughter of George and Evelyn Smith. Vicki graduated from Carl Albert High School in 1967 and went... View Obituary & Service Information

The family of Vicki L. Decker created this Life Tributes page to make it easy to share your memories.

Send flowers to the Decker family.