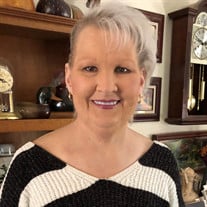 Tracie Dawn Mansfield (Barbaree), was born May 8, 1968 to Phillip Thomas and Gwendolyn Hicks Barbaree in Irving, Texas. Tracie Dawn left this earth to be with the Lord and blessed family on July 11, 2019. Tracie was a beautiful young child, full of giggles and life, with adventure in her eyes and rings of blonde curls. She was just the right amount of precocious and stubborn, tenacious and as ornery. Never one to say no to catching horny toads as pets, or chasing fireflies late into the summer evenings. Tracie was a constant animal lover until her last day. In her teenage years, Tracie was active in band and dance at Vinita Oklahoma high school. She was always laughing and smiling with her many, many friends and acquaintances. Tracie found humor in nearly everything, and could laugh at the drop of a hat. It was very contagious. In her adult life, Tracie worked in the finance department at Eastern State Hospital, and assisted the handicapped in Chelsea Oklahoma before dedicating herself to raising a family. Her heart and soul was making a place for her two sons, Joshua and Aaron, with all they needed. Never missing an event, Tracie always supporting whatever they chose to tackle. Tracie was gifted with a lifelong green thumb. She could grow anything, anywhere, anytime. A blessed trait passed down from her father, as it gave her much joy and satisfaction later in life. She would toil and plan, plant and groom the surroundings of her life. By all accounts Tracie would beautify any and all areas of her life and the lives around her. Tracie shed these bonds and went to be with those who went before after a long illness. Remaining earthbound are her sons Joshua Phillip and Aaron Zachary Mansfield of Tryon Oklahoma. Ex husband Lowell Mansfield of Tryon, Oklahoma. Her mother, Gwendolyn Gayle Barbaree(Hicks) of Tryon Oklahoma. A brother, Shawn Barbaree of Guymon Oklahoma. A niece, Bethany Anne Wells and Dusty of Amarillo, Texas. A nephew, Chancelor Ryan Barbaree of Amarillo, Texas. Great nephews Gabriel Thomas, Bentley Mason, Asher Rome, and Sebastian Beau Wells of Amarillo, Texas. Also Reece Acie and Gracie Elizabeth Layton of Truscott Texas. Aunts and uncles, Calvin and Charlotte Barbaree of Oklahoma City, Oklahoma. Pam Hicks of Guymon, Oklahoma. Cousins, Tim Hicks of Charleston, South Carolina. Chad Hicks of Guymon, Oklahoma. Mickey and Chris Hoopes of Amarillo, Texas. Joanna and Robert Jeffries of New Braunfels, Texas. Noelle and Toby Lankford of Amarillo, Texas. And numerous other relatives in Oklahoma, Texas, and Arkansas. Preceding Tracie was her father, Phillip Thomas Barbaree. Grandparents Elmo and Sadie Barbaree. Calvin and Joye Hicks. A niece, Ashley Caprice Layton. Uncles Richard Wise, Aaron, Lyndon And Dennis Hicks. Memorial Service Saturday, August 17th, 2019 - 10:00 AM - First Baptist Church of Tryon - Tryon 112 1st St - Tryon, OK - 74875

Tracie Dawn Mansfield (Barbaree), was born May 8, 1968 to Phillip Thomas and Gwendolyn Hicks Barbaree in Irving, Texas. Tracie Dawn left this earth to be with the Lord and blessed family on July 11, 2019. Tracie was a beautiful young child,... View Obituary & Service Information

The family of Tracie Dawn Mansfield created this Life Tributes page to make it easy to share your memories.

Send flowers to the Mansfield family.