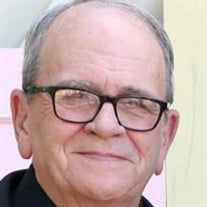 Funeral for Thomas “Frank” Parrish, 70, Comanche, will be at 1:00 pm Monday, January 7, 2019 at Hastings Baptist Church in Hastings, Oklahoma with Charles McConnell and Roy Lanten officiating. Frank died December 30, 2018 in Oklahoma City, Oklahoma surrounded by family and close friends. Burial will be at Walters Cemetery under the direction of Corbett Funeral and Cremation Service. He was born August 5, 1948 in Quincy, Florida to Billy Ray Parrish and Eva Elizabeth Parrish. They moved to Pampa, Texas when Frank was a small child. He attended Pampa High School, but graduated from Hammon High School in Hammon, Oklahoma where he met the love of his life, Donna Sue Drinnon. They were married on February 1st, 1966 in Wheeler, Texas. After attending college, he began his own construction company. When the oil industry declined, he moved his family to various places while working for different companies until settling in Lawton, Oklahoma where he eventually resurrected his own construction company, T.P. Enterprises, Inc. until his retirement. Once retired, he followed his dream of living at the lake and moved to Lake Waurika where he spent many hours fishing and working in his shop. Frank accepted Jesus Christ as Lord and Savior at an early age and was ordained as a minister at his home church, Hastings Baptist Church, on April 19, 2015. He is survived by his wife, Sue, of the home; three children: Dawn Miears and her husband Jason, Alicia Parrish, and Ryan Parrish and his finance LaToya Cathey, all of Lawton; six grandchildren: Danielle Cotton and husband Taylor, Kaleb Miears and fiancé Katleyn Fasig, Kolton Miears, Bryan Parrish, Keyshawn Jenkins, and Nevaeh Parrish; brother Gary Parrish and wife Mary; sisters Karen Paktinat and husband Javad, Susan Parrish and Brenda Morrison and husband Dan; as well as many nieces and nephews. He was preceded in death by his parents. Memorial contributions can be made to Hastings Baptist Church Youth Program PO Box 205 Hastings, OK 73548. Flowers may be sent before Sunday, January 6th to Corbett Funeral and Cremation Service. On Monday, January 7th, flowers may be sent directly to Hastings Baptist Church.

The family of Thomas Frank Parrish created this Life Tributes page to make it easy to share your memories.

Send flowers to the Parrish family.