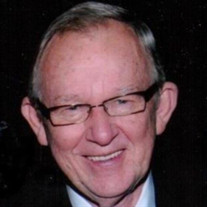 Thomas Leon Blalock of Edmond, Oklahoma, passed away March 4, 2020. He was born March 30, 1937 and raised with his five younger siblings in Midwest City by his parents, Lillian Christine Blalock and John Jackson Blalock. Tom graduated from Midwest City High School and earned a Bachelor of Science Business Administration from the University of Oklahoma while working full time in the grocery business. He served his country as a Staff Sergeant in the United States Army and was honorably discharged in 1966. A hard worker, Tom was promoted to Store Manager for multiple locations of Humpty Dumpty grocery stores. In 1970 Tom began a long career with Tom Brown Optical, an Oklahoma City based regional frame wholesaler and optical lens laboratory. He headed operations for TBO and succeeded Mr. Brown as president of the Company. Tom also served as president of the Southwest United States Optical Association and as a member of the National Board of Directors for the Wholesale Optical Association. An accomplished keyboardist, Tom spent his retirement entertaining residents at assisted living centers throughout the Oklahoma City area. Always quick with a smile and some newly coined phrase, Tom brought laughter to most any room he entered and especially to his beloved wife, siblings, children, grandchildren, nieces, nephews and cousins. As an ordained Deacon by the First Baptist Church at Midwest City, he relied on his faith to carry him through the many challenges that life on this earth brought and especially his last one – extensive stage IV cancer. Tom was a friend of Bill W for 31 years. Tom is preceded in death by his mother, father, daughter, Kelly, brother, Donald, and sister, Teci. He is survived by his wife, Barbara Lewis and her children, Randall Lewis Wegner and Toni Raye Fieker and husband Dale; his son, Thomas J. Blalock and wife Vi; his sisters, Janice Ellen Campbell, Annie O’Brien Gonzales and husband Tom, and Mary Etta Blalock; his sons, John J. Blalock and Timothy W. Blalock; his grandchildren, Karli, Bailey, Kathryn, Braxton, Chase, and Will; and many nieces, nephews and cousins all of whom he dearly loved. Service will be held at 10:30 a.m. on Tuesday, March 10, 2020 at The Chapel at Crossings Church, 14600 Portland Ave., Oklahoma City, OK. In lieu of flowers, please consider a donation to Kelley Club Inc., 2300 N. Kelley, Oklahoma City, Oklahoma 73111.

Thomas Leon Blalock of Edmond, Oklahoma, passed away March 4, 2020. He was born March 30, 1937 and raised with his five younger siblings in Midwest City by his parents, Lillian Christine Blalock and John Jackson Blalock. Tom graduated from... View Obituary & Service Information

The family of Thomas Leon Blalock created this Life Tributes page to make it easy to share your memories.

Send flowers to the Blalock family.